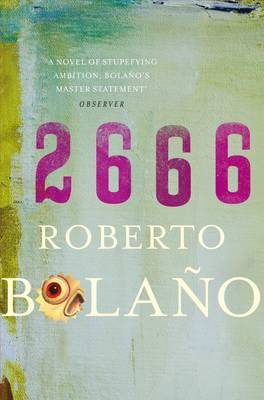 In the introduction to Bolaño’s novel, which was published posthumously, his editor explains that Bolaño intended for the novel to be published as a five novel series rather than as one colossus tome. Up until Part 5, I wondered if his heirs and publisher had done him a disservice in publishing this collection as one novel. Each part felt standalone; the content and focus of one part was different from the next with only the occasionally overlap of characters.

As daunting as the size of this novel is, Part One was quite the hook for me. I was rather enthralled with the academics and how their love for Archimboldi manipulated their relationships and decisions. I found the shift to entirely different character and storyline to be rather jarring and disappointing given how Part One ended, but Bolaño’s writing style is so vivid and intricately written that I was charmed enough to push forward.

Parts Two and Three had compelling moments; I was particularly intrigued by the gentleness the philosopher showed to his estranged wife when she returned after years of silence. But Part Four was a slog to get through. Reading about hundreds of murdered women – I wondered at one point if the title was the number of women murdered – was very difficult and provided a strong incentive to put the book aside and stop reading.

But I persevered and was rewarded with a final fascinating and (finally) connecting chapter. The chapter explains how pain permeates through generations, how horrors in one generation and/or one part of the world can bleed over to another.

Bolaño’s novel may be considered unfinished, but I felt like this chapter provided the closure that I needed. The stories told have stuck with me not because questions linger (although, some do), but because of the quality of Bolaño’s writing and the way each part enveloped me as a reader. I’m less muted in my praise than some of the major publications that brought it to my attention back in 2008, but I still gladly and eagerly gave this novel four starts on GoodReads.