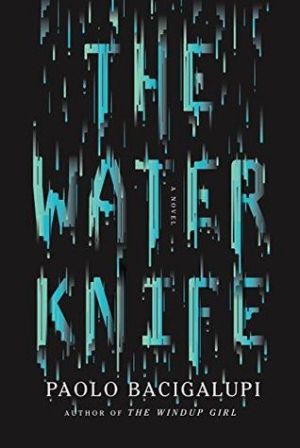 Set in the not-too-distant-future, Bacugalupi’s novel finds the southwestern United States desolate and abandoned after a series of Category 6 hurricanes – a new categorization on our 1 to 5 scale – flattens coastal Texas and a massive, continuous drought has stopped the Colorado River from flowing downstream at the rate required by the Colorado River Compact of 1922.

The details are sketchy as the story largely takes place in the Arizona city of Phoenix and Las Vegas, Nevada. But it appears that Colorado has diverted most of the water to the eastern portion of its state – where I and about 85 percent of Colorado’s current population of 5.6 million live – and left the Western Slope cities of Grand Junction, Cortez, and Montrose to collapse without water.

The United States federal government has largely abdicated responsibility for interstate water sharing, leaving the state of California and the city of Las Vegas to compete over who can snap up the older water rights. Both employ the federal court system to enforce their water rights, the local militias to keep water migrants from Texas and the Cartel States (formerly known as Mexico) from coming into their state or city boundaries, and a black ops group known as the “water knives” to cut off and divert water from other cities, including the rapidly dying cities in Arizona.

Enter Angel Velasquez, a former gang member turned water knife for Catherine Case, the woman tasked with insuring water flows to Las Vegas and its new developments, which cater to Chinese investors and US politicians waiting for the last drop of water while holding on to transit visas to Vancouver, Seattle, and other wetter cities. After cutting off water to another city dependent upon the Colorado River (and justifying it by a recent court order still to be appealed), Angel is dispatched to Phoenix as rumors begin to swirl about a new water source that will revive a dying city.

There, Angel encounters Lucy Monroe, a Pulitzer Prize-winning journalist who is dead set on discovering who brutally tortured and killed her friend, an employee of the Phoenix Water Department. Lucy is operating on her own set of rumors: mainly that water knives are real and that her friend was killed by either California or Las Vegas as they searched for that mythical water source.

Tangled up in the violence and intrigue is Maria Villarosa, a teenager who crosses path with both Angel and Lucy after she witnesses the murder of a man both Angel and Lucy wanted to question. Maria is a Texas climate refugee just trying to raise enough money to pay a coyote to smuggle her across the new southern border into a land of milk, honey and, most importantly, water.

I have been lax in attending my work’s science fiction book club over the last year but when they announced they’d be reading The Water Knife, I immediately RSVP’d as a ‘yes’. The book, which I had not heard off before receiving the meeting invite, checks all the boxes for what I like in sci-fi novels: a post-apocalyptic, dystopian setting; a “deep state” agent going rouge; and a woman who promises to upend the whole regime.

It also didn’t hurt that water – and the southwestern United States’ lack of it – is something that I’ve read about in the pastand continue to follow in the news now that I’ve decided to call Colorado home. (I haven’t read the book that Bacigalupi’s characters reference as the warning they all ignored, Cadillac Desert, but I am an avid subscriber to the news magazine Bacigalupi credits as his inspiration in the afterward, High Country News.)

In many ways, the book didn’t disappoint. It was a fast-paced, intriguing tale of the desperate lengths cities and people will go to preserve their lifestyle in spite of evidence that they should abandon it. I practically devoured the book, staying up later than I normally do to keep reading and waking up early in order to finish it before the day’s commitments got in the way.

I love when dystopian novels critique a current value or path without beating the reader over the head with the message, and Bacigalupi accomplishes this quite well when it comes to the migrant element. When read closely, the book also provides some rather biting commentary on how we currently treat migrants in this country through the story of Maria and the other Texas refugees she lives near. No one cares if they are exploited or abused or die so long as they stay on thatside of the border.

When it comes to the message on water, the characters all take the point of view that we knew this was coming and did nothing, and so that message is pretty in your face. But I did like the generational tension between the three characters; it is largely in line with what we see occurring today with the debate over climate change.

The younger are mad that the older did nothing despite being warned and resent the “back in my day” mentality of their elders. The older cling to their memories of how things use to be (even though it is impossible to go back) because they can’t see a reason to hope or act without those memories.

The one thing I really didn’t like about the novel? How easily Bacigalupi falls into the trap of classic science fiction. By that I mean, the two main characters end up having sex because what else are a male and a female protagonist to do? I was both rolling my eyes and stifling a laugh as I read that interaction.

Other than that development, the book had me on the edge of my seat, horrified at what could be a very real possibility in the not too distant future. After all, Lake Mead, the reservoir that provides drinking water to Las Vegas, is at its lowest levels since the 1960s. And, amid a 19-year drought, the seven member states of the Colorado River Compact only reached a new agreement on how to manage their shared water back in March 2019.