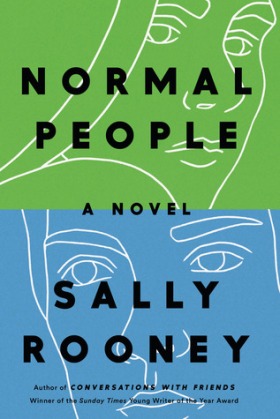 In addition to winning the 2018 Costa Book Award for Novel, Rooney’s novel was also longlisted for the 2018 Man Booker Prize and for the 2019 Women’s Prize for Fiction. Needless to say, I was thrilled to see it offered as one of the options for April from Book of the Month, a monthly book subscription service that I’ve been part of for the last six months. So thrilled, in fact, that this is the first Book of the Month pick that I’ve read as soon as it arrived in the mail.

For the main characters in Rooney’s novel, Connell’s decision to attend the big dance with someone other than Marianne ends their secret relationship and breaks Marianne’s heart. But Rooney rejects the typical conclusion to this trope by sending her characters off to Trinity College in Dublin and reversing their circumstances.

Marianne quickly acclimates to the college, becoming popular almost immediately upon her arrival. Connell, in contrast, struggles to find his footing at Trinity amid the wide economic gap between himself and the other students.

When his path cross with Marianne, Connell is eager to reconnect with the one person at Trinity who understands where he’s coming from. But Marianne is still hurting from the way Connell treated her in the past and, more importantly, trying to navigate how she wants men to treat her romantically and sexually in light of the abuse she experienced as a child.

That last aspect is the real departure from this romance trope, and its addition to the narrative is what saved this book from being dismissed as common and expected. The emotional difficultly in navigating a relationship with someone has been abused in the past is thoughtfully done, and the respect Rooney holds for her characters is evident.

Rooney makes it clear that Marianne must address her past in order to participate in a healthy relationship. She doesn’t try to pass Connell’s needy yet emotionally distant behavior as the solution to Marianne’s problems. And she recognizes that Connell cannot “save” Marianne, that asking him to do so would put too much weight on his shoulders.

For all the praise I want to heap on Rooney’s handling of this subject, there were other aspects of the novel that distracted from its beauty. The dialogue felt stilted, particularly during the sex scenes, and the periphery characters (with the exception of Connell’s mother) were flat and one-dimensional. Marianne’s mother and brother were villains without clear motives, and the women around Connell and Marianne after college were merely flighty bimbos used as roadblocks to the main characters’ romantic reunion.

The way Rooney flips this common trope and infuses it with more trauma and nuances is clever, and I can see why the narrative alone would garner the praise and accolades it has so far received. But, while I wouldn’t characterize the novel as a letdown, the novel didn’t wow me the way I hoped it would. It was enjoyable and intriguing both not with out flaws, thus earning a middle of the road rating from me.