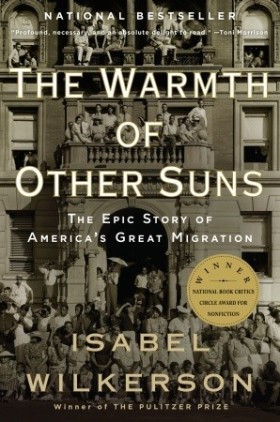 Subtitled “The Epic Story of America’s Great Migration”, Wilkerson’s book follows three individuals in order to construct a larger narrative about the movement of black Americans between 1915 and the 1970s. Historians estimate roughly six million black Americans moved from majority black southern states governed by white minorities to northern and western states where racism had not (yet) been codified through Jim Crow laws.

The three individuals profiled in Wilkerson’s book left the south during the different waves of the migration, but Wilkerson structures her narrative in order to show the similarities of their experiences. The first portion of the book introduces the reader to the three individuals, recounting the history and experiences of their families in the South. The second portion of the book then address each individual’s decision to leave and the efforts undertaken to escape from the South.

Ida Mae Gladney left Mississippi for Chicago in 1937 after sharecropping become even less profitable during the Great Depression. George Starling fled Florida in 1945 after the white orange growers began targeting him for unionizing black pickers and demanding higher wages. Robert Foster left in 1953 – a time that Wilkerson calls “the dying gasp of the Jim Crow South” – in order to pursue the medical career denied to him in Louisiana.

Neither Gladney nor Starling could tell anyone other than trusted family members about their plans to leave. The farmer they sharecropped for or the local sheriff could and would do anything to keep them in the South. Each took the train north, although they were relegated to the colored-only car until the train passed across the Mason-Dixon line.

In contrast, Foster’s family and friends threw a going away party for him, and he drove himself to California. But he still found his movements were restricted by the forces of racism, even in non-Jim Crow states. He was forced to drive through the night from Next Mexico to California because motel owners turned him away and a black person could not safely stop on the side of the road.

In the second part of the book, the three individuals arrive in the “promise land” – Gladney to Chicago, Starling to Harlem in New York City, and Foster to Los Angeles. But the promises of these lands do not live up to their expectations. Racist employers refuse to hire blacks or pay them well below market rate for their labor, which enrages the European immigrant communities.

These immigrants and the white Americans already living in Chicago, New York City, or Los Angeles refuse to live next door to blacks, setting fire to apartment buildings that allow blacks to move in or immediately putting their own homes on the market. Such reactions occurred regardless of the time period in which the narrative is set.

In the final part of the book, the narrative introduces the reader to Gladney, Starling, and Foster as elderly individuals reflecting on the outcomes of their lives. Gladney voted for Barack Obama when he ran for an Illinois Senate seat, but she watched her blue-collar Chicago neighborhood be plagued with violence. Starling watched his family succumb to drug addiction despite his efforts to provide them a life with more opportunity and freedom he had in Florida. Foster found economic success, even becoming the personal physician to Ray Charles, but lost his wife to cancer at a young age.

Each outcome is heartbreaking and deeply personal. But each one also confronts the stereotypes associated with blacks in large American cities, documenting the systemic biases and racism that curtailed their opportunities. And yet Wilkerson also shows that blacks in America often had no choice; the opportunities in the North and West were still far more numerous than the South, where options were limited by the law and by violence.

The size of Wilkerson’s book is daunting, but I sincerely wish I hadn’t put off reading it for as long as I did. The stories and experiences shared were eye-opening, informative, and written in a style that makes them easy to understand without diminishing the horrors within. To be completely honest, I feel utterly ill-equipped to review it properly so I will end my post with the assertion that this book will be on my Best of 2019 list at the end of the year.