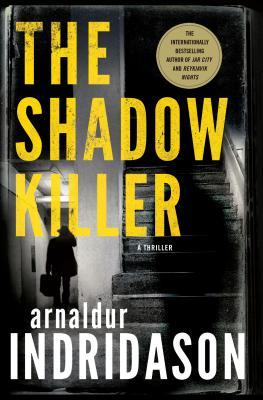 Amid the American and British occupation of Iceland in 1941, a man is founded murdered in a small apartment in Reykjavík – a swastika drawn across the victim’s forehead with his own blood. When the murder weapon is determined to an American-issued service pistol, a Canadian-Icelandic military officer by the name of Thorson is loaned out to the Icelandic police to aid in the investigation.

Tensions between the Icelandic people and the military forces are high; the locals resenting the military for wooing the young women of Iceland with their money and extra rations in an event known as “The Situation”. But Icelandic police de Flóvent accepts Thorson’s assistance with little animosity when it becomes clear the dead man – a traveling salesman – has connections to the Nazi Party and access to tools typically used by German spies.

While this book is the second in Indriðason’s Reykjavik Wartime Mystery series, I often wondered if it wasn’t meant to be read as the first in the series. Flóvent and Thorson introduced themselves to each other and to the reader as new acquaintances, and their relationship to one another is confined by professionalism in a way that it wasn’t in the first book, The Shadow District.

The lack of warmth between the characters was the weakest part of the story for me. Thorson and Flóvent were quite stilted compared to the earlier book; my reasons for liking Thorson forgotten as I turned the pages. And I felt like the supporting cast of characters fell into easy tropes – the angry, old man and the scheming femme fatale.

That said, the historical fiction aspects of the novel were quite intriguing. This is the third book where Indriðason has mentioned or focused on “The Situation”; it’s clearly an event that he finds fascinating and important to Icelandic history. In this narrative, The Situation takes more of a backseat to the twists and turns of the investigation, allowing the reader to understand why the presence of the Allied forces was so important despite the locals’ resistance.

“Thorson was taken aback by his assertion. Two years ago Flóvent could have said something like that without a second thought, but a great deal had changed since then. Iceland was no longer a remote island, cut off from the rest of the world. The country had been dragged into the maelstrom of world events and plenty was happening here now that would have been inconceivable before. Had Flóvent not yet woken up to this new reality or had he temporarily forgotten it? There were no longer any grounds for such misplaced optimism. Flóvent was deceiving himself.”

Given all the twists and turns, I am glad that Indriðason decided to use more of a straightforward, linear narrative – no alternating between a present-day crime and the past, no wondering how events are connected across time. As much as I missed the present-day character in the previous book, the narrative would probably have become badly muddled if another crime was introduced to the reader.

A third book in this series, Petsamo, was published in Iceland in 2016. No word yet on a publication date (or English title) for the book in the US or UK.