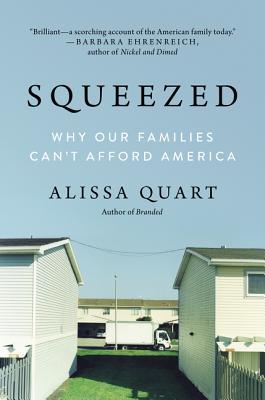 With its provocative subtitle “Why Our Families Can’t Afford America”, I’ve had my eye on Quart’s book since it was published back in mid-2018. The book promised to examine how and why Americans were finding themselves unable to make ends meet and remain inside the middle class that they were born into.

“…65 percent of all Americans worry about paying their bills – as the parents I’ve interviewed, murmuring anxiously at their dining room tables, can attest. One reason for this anxiety is that middle-class life is now 30 percent more expensive than it was twenty years ago; in fact, in some cases the cast of daily life over the last twenty years has doubled.” (pg. 5)

Specifically, the blurb included on the dust jack of Quart’s book points to the high cost of parenting as the cause, stating that Quart “offers real solutions to these problems, including outlining necessary policy shifts, as well as detailing the do-it-yourself tactics some families are already putting into motion, and argues for the cultural reevaluation of parenthood and caregiving”.

Unfortunately, this is a case of the blurb misconstruing the actual contents of the book. Quart does spend time discussing how parenthood – particularly the cost of daycare – is eating up larger and larger portions of people’s take-home pay. She does rail against the way Americans fail to value the role of caregivers – in respect, in government policy, and in pay. And she does discuss how people have come up their own solutions, either by opening 24-hour daycare centers or by entering co-parenting agreements with people who are not biologically related to their children.

But those discussions comprise only two chapters of ten included in this book. Other chapters are focused on:

Any of the chapters could have been a book in their own right, and I can appreciate that Quart wanted to offer a number of answers to “why” because the collapse of the middle class is a multifaceted problem. But I was disappointed with the way each “why” was approached.

Each chapter reads like a longform article; antidotes are interspersed among facts and figures in order to add color and emotion to the story. Except, the antidotes included are rushed through, and I never felt an emotional connection with any of the people Quart highlights.

The closest I came was the immigrant mother attempting to sign her son up for high school without the educational advisors the wealthy in New York City can afford. But I also found myself wondering why Quart decided to focus on this particular woman.

Yes, she was a nurse in her home country, but her job here would, unfortunately, classify her as the working poor in the United States. If Quart is concerned about how people are falling out of the middle class rather than getting into it, shouldn’t she have picked a different antidote?

The book’s arguments also suffer because the majority of her examples come from New York City and California. Having lived in one of the most expensive cities on the East Coast, I loathe when people scream about “East Coast elitism” ignoring the rest of America.

But, in this case, I think the charge is fair given how much Quart focuses on her own situation as a married, mother of one working as a freelance writer in New York City. She also approaches the role of race in economic discrimination with “of course” statements rather than analysis, and she frequently she unnecessarily inserts sarcastic comments about Trump and Republican voters.

When it comes to solutions, Quart is light on tangible offerings. I think it is fair to say, “look, this is a massive problem with many causes, and no one solution is going to fix it”. But Quart offers free daycare, a ban on robots, and universal basic income as the only solutions without thinking through the unintended consequences of these policies.

For example, I have yet to see anyone answer how UBI won’t automatically raise the cost of living and consume the extra $12,000 that Quart says the government should provide to its citizens. And how do any of these policies prevent further offshoring or Americans fetishizing the 1% in their media consumption?

Definitely a disappointing read. In the future, I think I turn my attention to books that focus on a singular cause. Clearly, overarching primers do not work for me.