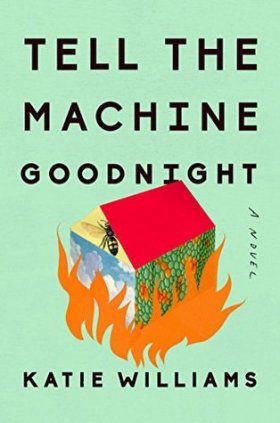 Apricity is happiness, proclaims the company’s advertising slogan for a machine that reads your DNA from a cheek swab and provides three recommendations that will enhance your happiness. Its suggestions run the gambit; everything from arrange fresh flowers to cut off the tip of your middle finger,

“Pearl had always marveled at this: to think that the solution to one’s happiness lay next to the residue of the bagel one had eaten for breakfast!”

Reactions to these suggestions run the gambit as well. Pearl, an Apricity technician based in San Francisco, has watched people reject, accept, and impassively react to the suggestions Apricity makes. One woman screamed at Pearl after Apricity suggested she find a religion to follow; another barely blinked when Apricity said he should leave his wife and hire prostitutes to fulfill his sexual desires.

Pearl’s own son, Rhett, refuses to allow her to use Apricity on him, accusing her of wanting an easy solution for his depression and anorexia. And Pearl is unable to rebuke his statement because she’s unsure if she wants him to be happy for Rhett’s sake or for her own.

As Pearl wrestles with whether or not she should deploy Apricity on Rhett, the story alternates to follow other characters from within their world. Pearl’s boss, Carter, uses a reprogrammed version of Apricity in the hopes of landing a promotion, but his efforts expose what he truly desires – unfettered power.

Pearl’s ex-husband (and Rhett’s father) creates a performative piece of art based on Apricity’s recommendations while his new wife is, unbeknownst to him, subjected to Apricity readings at each of her parole meetings. One of Pearl’s customers, a young celebrity named Calla Pax, is also subjected to Apricity readings as the horror movie she’s making is taking a psychological toll.

Given the alternating focus on different characters, each chapter reads like a standalone short story connected by the Apricity machine and a relationship with Pearl. The flow of the transition from one chapter to the next varies. I found the shift from Rhett to Pearl’s boss in the third chapter to be the most jarring, although Carter’s story was my favorite of the ten chapters.

The ending doesn’t provide much closure, but each chapter offers a unique angle on the conundrum of happiness. In these vignettes, to be happy means to improve oneself. (Apricity strikes out with asterisks any suggestions that involve violence or harm to oneself or others.) But does eating honey more often really led to happiness? Can technology – one constructed by coders and a business with a bottom line – really offer an individualized recipe for happiness?

Interesting, thought-provoking questions, for sure. I enjoyed reading this one and was delighted with the change of pace it offered from the space wars that my new book club tends to focus on. If you think science fiction isn’t your genre, I urge you to pick this one up and rethink your stance.