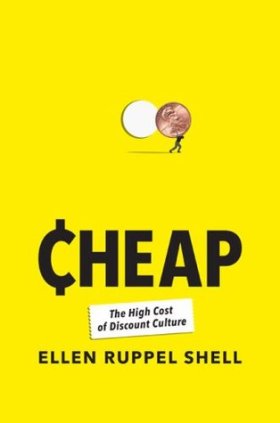 Since reading The Millionaire Next Door earlier this month, consumerism has been dominating my thoughts. I’ve been particularly contemplative of how people have rejected of material goods, attracted to articles like one in The Guardian by a man who lives “houseless” in Alaska and contemplating rereading Not Buying It.

In my search for more books on the topic, I was reminded of Shell’s book on consumerism. I borrowed her book from the library in 2012, yet failed to finish before it was due back to the library. Since I’m not about to move off the grid or stopping buying anything for year, I turned my attention to Shell’s book and the, hopefully, more attainable lessons within.

Subtitled “The High Cost of Discount Culture”, Shell details how discount stores started in the United States, how Americans became fixated on price, and how the price advertised does not always capture the true costs of producing a good. Like most articles and books on discount stores, Wal-Mart features heavily in Shell’s book, but the mega-retailer is the alpha or the omega of the story that Shell is trying to tell. (For critical examination of Wal-Mart’s role in the economy, I’d recommend Big Box Swindle by Stacy Mitchell, which I reviewed here.)

Instead, Shell dedicates a chapter to the history of discounter retailers in America, starting with a son who wanted his family owned leather goods store to sell more than the quality of their goods demanded. The father was adamantly against the idea; he felt that lowering their prices would anger their fellow retailers. When the money started pouring in, though, the other retailers followed suit and lowered their prices. Thus, our current race to the bottom to offer the cheapest goods possible.

“Harvard cultural historian Lizabeth Cohen has pointed out that mass-market consumption offers the façade of social equality without forcing society to go through the hard work of redistributing wealth. Low prices lead consumers to think they can get what they want without necessarily giving them what they want — or need.” (pg. 48)

From there, Shell turns her attention to how the drive for cheap distorts the global supply chain. Furniture makers like IKEA present their products as sustainable, but won’t spend the extra money to truly verify the sustainability of the wood harvested for their products. (They also don’t make sturdy products that can survive multiple moves.)

In a different chapter, Shell explains how the demand for cheap food in America leads to inhumane conditions for animals and produce recalled due to e. coli contamination. The all-you-can-eat shrimp dishes here in the United States has led to a boom in shrimp farming in Thailand. Accompanying this boom are mountains of shrimp waste left in piles around the country and laborers forced to work grueling hours with little pay.

Shell’s book takes a broad view of the American (and globalizing) fixation with “cheap”, and thus serves as a good primer on the topic. Each chapter reminded me of a more in-depth book I have read (or want to read) on the example she’s detailing.

I do wish the book has spent more time discussing the psychology of consumerism and our fixation on cheap. Shell introduces her book with examples from her own life where she bought something because she thought she was getting a good deal. Her anecdotal story set up the expectation that psychology would be discussed, but she moved quickly through an explanation on why we’re more attracted to a pricing ending in 0.99 and onto the history of discounters. It left me wanting more.

That said, the book as a whole fulfilled my desire to read more on the general topic of consumerism. I flagged several of the references and recommended reading she included at the end of the book for the next time I want to dive more deeply into this topic.