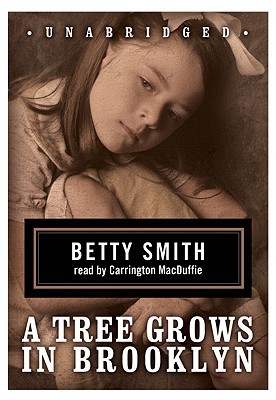 Born in the Williamsburg area of Brooklyn in 1901, young Francie Nolan has fallen in love with reading. She’s determined to read every single book in the small, public library, and has already made her way through the As when Smith’s novel opens.

Along with a love of reading, Francie also possess a keen ability for observation, noticing the plant in the bowl on the librarian’s desk. Francie is determined to grow up with a large library of her own and a bowl for plants that change with the seasons.

Yet, Brooklyn in the 1900s is a place of slums and poverty, and Francie appears to be starting off life with so much against her. Her father, Johnny, belongs to the union yet can’t keep a job due to his drinking. Her mother, Katie, is a cleaning lady who keeps the family fed and housed, but her meager savings are wrecked by the series of unfortunate events detailed in the recounting of Francie’s life.

If I had to select a singular moment to define this book, to explain why I loved it so, I would point a moment near the end when Francie is finishing up grade school. Her teacher has expressed disappointment with Francie’s writing, saying that her subject matter of poverty, starvation, and drunkenness — things Francie experiences in her own life — are ugly and inappropriate. That people can admit these things exist, but should not write about them. When Francie objects that what she’s written about is the truth after her teacher says beauty is truth, her teacher insists…

“…by truth, we mean things like the stars always being there and the sun always rising and the true nobility of man and mother-love and love for one’s country.”

And yet those things are exactly what Smith infuses in her tale of poverty, starvation, and drunkenness. The sun always rises for Francie, even after she looses a beloved parent or loses her only job. She experiences “mother-love” from Katie — fierce, violent love when she is attacked in a stairwell and quiet, supportive love when she loses hope.

Her parents raise her to love America, to believe that only in this country could a child of her background rise above the poverty and struggles of the Old Country. Francie eagerly claims the label of American, even when her teachers try to affix a modifier to her nationality (i.e. Irish-American, German-American).

And, even though her father may not appear a noble man, in Francie’s eyes, Johnny is exactly that. He is the best of fathers, an eager supporter of her education, and always manages to pull himself out of the bottle when his family’s situation becomes especially dire.

I kept circling back to the conversation between Francie and her teacher as I finished the novel because it seemed as though Smith was answering her own critics. The story contained with Smith’s novel serves as a reminder that beauty, that universal truths can be found in the most dire of circumstances. Thus, I can see why the novel is considered a classic. The setting is vividly evoked, the characters wonderfully crafted, and the narration by Carrington MacDuffie a delight to listen to.

I read this book for the Classics Club, which challenges participants read and discuss fifty or more books considered to be classics within a five-year period. My personal goal for this project is to read seventy-five books in three years ending on August 15, 2017. This deadline has since come and passed, but I am still trying to work through my list by August 15, 2020. You can find out more information by checking out my introductory post or project post.