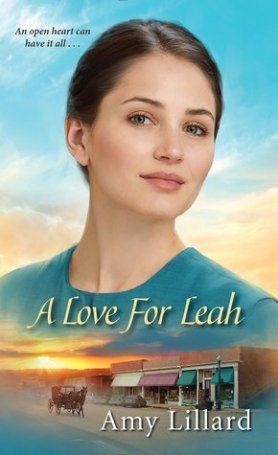 Having returned to her hometown in Mississippi, Leah Gingerich has started a secondhand store in the community and agreed to raise her twin sister’s teenage son while Hannah works towards joining the Amish church. What Leah won’t do, though, is consider becoming Amish again. She and Hannah left nearly twenty years ago, and Leah has found her religious community among the more liberal Mennonite church.

When Jamie Stoltzfus moves to the area with his young nephew, Leah wants to provide as much assistance as she can. Jamie’s nephew, Peter, lost his entire family in a house fire, and the trauma has left him mute. Leah believes that a member of her church can provide the therapy Peter needs, but her suggestions earn the ire of Jamie, who believes a fresh start is all Peter needs. As Jamie’s ire turns into love, though, the two must reconcile the differences of their faiths and decide how to provide Peter with the loving home he needs.

With Lillard’s Wells Landing series, readers who pick up the books out of order run the risk of having the outcome of the previous book(s) spoiled for them. This is a risk I was willing to chance by picking up A Love for Leah, the second book in her Amish of Pontotoc series, without reading the first in the series. (None of the three library systems I belong to have the first book.)

However, with this book, it was the ending of the previous novel that spoiled for me. Rather, it was the foundational information about Leah’s past that was kept from me as an out-of-order reader. Leah left the Amish with her twin sister (the protagonist of the first novel in the series) over 16 years ago, but the reason for the two leaving and later returning appears to be covered in the first book. Scant mentions of these foundational facts are made with a familiarity only those who read the first novel in the series would understand.

My lack of familiarity with Leah’s past may have also contributed to why I felt like the end was rather rushed. I do expect the ending of Lillard’s novels to be tied up nicely with a bow, but Leah went from wavering in her beliefs to solidly sure without much justification as to why. Lillard also defaulted back to the cliché of an ex-partner who won’t let go of a failed relationship to keep the narrative moving forward, which was disappoint because her plots usually bring a breath of fresh air to this niche genre.

Least you think my perception of the novel was overwhelming negative, I did enjoy reading this novel. Neither Leah nor Jamie are perfect, but Lillard allows their behavior in the story to show this fact rather than telling the reader that they’re flawed. (An issue I find is common in this genre.) The story moves at a quick yet believable pace and provided me with the “palate cleanser” I needed after reading several books with much heavier content (i.e. murder, political oppression).