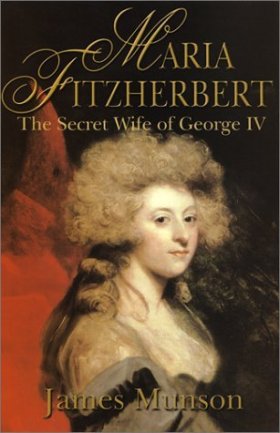 One of the books I remember reading as a teenager with great fondness is The Secret Wife of King George IV by Diane Haeger, a fictionalized account of the love affair and marriage between a Catholic Marie Fitzherbert and the protestant heir to the British throne. After rereading that novel in 2009, I decided I wanted to read a nonfictional account of this scandalous event in British history.

It took several years to receive (and read) a copy of Munson’s book from PaperBackSwap, but I finally finished the book during a badly delayed flight over the weekend.

Munson takes a rather critical view of the love affair that Haeger presented in her novel. More than that, though, he takes a rather critical view of his main subject. To him, Maria Fitzherbert is not a spurned wife who was abandoned by her husband in the name of power and money. Rather, Fitzherbert is a worldly women who could be rather conniving and vindictive in her desires to find a husband, to exert influence over George, or to keep custody of her friends’ children.

In fact, in Munson’s presentation, it is hard to believe that George and Maria were ever in love. Certainly not the point where George would risk his place in the succession to marry her!

The lack of feeling between these two (as expressed by Munson) could certainly be due to the fact that Fitzherbert’s papers and diaries from this time period were destroyed at her request. Munson must rely on the diary of Fitzherbert’s closest friend, a Lady Anne, and the papers of her brothers to construct much of his story.

Yet Munson also starts out the book saying that he feels previous biographers of Fitzherbert romanticized her and made her a martyr unjustly. I certainly appreciate more nuanced views of women in history, but this one felt slanted towards painting Fitzherbert in a negative view rather than constructing a complete picture of this woman.

The lack of primary documents also means Munson spends much of the book exploring and explaining other events of this time period as he works to interview the viewpoints he does have access to. Certainly Fitzherbert existed and operated within the changing political winds of this time, but it seems an unnecessary amount of attention was spent on others who exist at the periphery of Fitzherbert’s story. I found myself skimming whole pages as I waited for Munson to get back to the subject matter at hand.