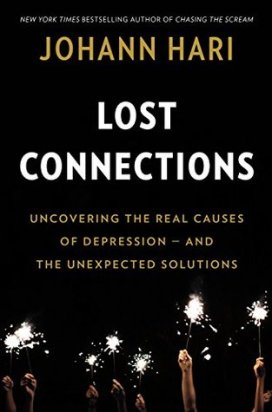 Hari spent years taking anti-depressants under the belief that his depression was driven by a chemical imbalance in his brain. This is what his doctor told him when he was a teenager, and it is what he continued to believe as his depression remained and his dosage increased year after year. Eventually, though, Hari started to hear anecdotes that made him wonder if the theory his doctor sold him on wasn’t true.

“How could I still be depressed when I was taking antidepressants? I was doing everything right, and yet something was still wrong. Why?”

In this book, as the subtitle of “Uncovering the Real Causes of Depression – and the Unexpected Solutions” suggests, Hari documents the various causes of depression that doctors, psychiatrists, and other medical professionals have uncovered after years of research and studies. Namely, Hari places the blame on the rise in depression and anxiety upon the lack of connections between people.

“What if depression is, in fact, a form of grief—for our own lives not being as they should? What if it is a form of grief for the connections we have lost, yet still need?”

As he antidotally points out with his story of his own childhood and that of a protest movement born after the Berlin Wall fell, our lives are consigned to private spaces – our homes, our cars – and we rarely interact with people outside of these spaces. This increasing isolationism not only foster depression, but it makes us fearful of “others” and increases the levels of anxiety people feel when they do try to leave our private spaces.

“Protracted loneliness causes you to shut down socially, and to be more suspicious of any social contact, he found. You become hypervigilant. You start to be more likely to take offense where none was intended, and to be afraid of strangers.”

Additionally, because we don’t know our neighbors and don’t have shared values, we listen to the messages of advertisers and fall into the trap of materialism. We get fixed on the lives we perceive our neighbors are leading as well as turn to material things to fill the void that social interactions once filled. (Hari points out that bowling leagues have falling to the wayside as a favorite American pastime while shopping has risen in popularity.)

I can’t say that what Hari presented was truly groundbreaking information for me. I’ve read other books criticizing our materialism, and I’ve listened to podcasts – including one that interviewed Hari and brought this book to my attention – that cover the dividing of America and the frying of our social fabric.

Yet, the way Hari presented this information was well-done. He lays out the case for each of the causes in standalone chapters while simultaneously responding to the critiques people may bring up for the studies he uses to support his claims. It helped foster the feeling that I was having a conversation with Hari rather than being lectured to.

I did find my enjoyment of the book dropped a bit when Hari turned his attention to offering solutions. In a few cases, I felt like he was repeating what he had already covered in his chapters detailing the causes because many of the studies proving the causes included the solutions.

I also felt like some his solutions weren’t as well-developed as his chapters on the causes. Case in point, when covering how a culture of “Buy! Buy! Buy!” lends people to expend their resources and their time in unsustainable and fulfilling ways, according to Hari.

Yet his solution was to suggest a Universal Basic Income (in addition to cutting back on purchases), and he used an older experiment in Canada that was never fully studied to support that suggestion. There are several more case studies, including one in Finland (if Hari wanted to continue to focus on Western countries), that may have better illuminated his points.

That said, this book as a concise and fascinating examination of how our society’s obsession with solving all aliments with a pill may not be the right answer. Although, I’d be remised if I didn’t stop and commend Hari for not taking the viewpoint that everyone should stop their meds right now. He is very clear that medications work for some and any changes should be done under doctor supervision.

I also appreciated that he rejects the idea that people’s depression can be cured by trying harder. I see far too many memes and messages on social media saying things will get better with self-care or with seeing the good and the like. It’s not that easy, though, and I hate how our society puts the blame for depression on those suffering from it.

“This is why I believe we should not—must not—talk about solving depression and anxiety only through individual changes. To tell people that the solution lies solely or primarily in tweaking your own life would be a denial of so much of what I learned on this journey. Once you understand that depression is to a significant degree a collective problem caused by something that’s gone wrong in our culture, it becomes obvious that the solutions have to be—to a significant degree—collective, too. We have to change the culture so that more people are freed up to change their lives.”

It’s a viewpoint that I’ve yet to discuss with my friend who is completing a residency in psychiatry, and I immediately dashed off an email to her bemoaning how she doesn’t have time to read because I’d love to hear her thoughts on this one.