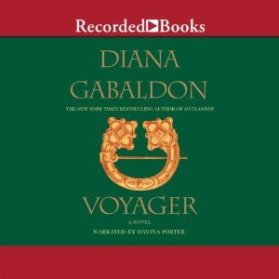 The third installment in Gabaldon’s Outlander series picks up with the aftermath of the events of Culloden, where Jamie planned to stand in battle with the Mackenzie and Fraser lcans, and Claire stepping back through the stones to her life in post-World War II. In the twenty years since that moment, Claire has reunited with her first husband, Frank Randall, and traveled to Boston, Massachusetts to start a new life together.

As part of this new life, Claire has raised her and Jamie’s daughter, Briana, as Frank’s and set out to become one of the few female doctors at Harvard Medical School. After Frank’s untimely death, thought, Claire takes Briana back to Inverness, Scotland to divulge the truth about her parentage. When Claire and Briana learn that Jamie survived the slaughter at Culloden, Claire faces the choice of returning through the stones to Jamie or leaving her daughter behind forever.

With Briana’s encouragement, Claire decides to return. Her reunion with Jamie sets the two off on a voyage across the seas — from Scotland to the Caribbean — as they try to save Jamie’s nephew, Young Ian, from kidnappers and the Bakra.

I’ve attempted to read this novel three times before. The first attempt was back in December 2015 soon after I finished the second book in the series. My second attempt was in May 2016 when I decided to purchase the Kindle edition of this novel rather than lug around a printed copy. I read about 37 percent of the novel by July 2016 before decided to give up once again.

It wasn’t always clear who was talking or contemplating, and I found these transitions jarring. The audiobook, thankfully, did a better job stressing who was speaking thanks to Porter’s use of unique voices for each character.

The second reason is the story, itself. I gave up around 37 percent in because I was troubled by the experiences Gabaldon was putting her characters through or the decisions she was having them make. Jamie keeps secrets from Claire, which makes him far less of the romantic hero that the first two books established him to be. He also decides to marry the woman who once tried to have his beloved Claire killed for witchcraft.

But he was also raped (again), and much of what he is put through after Culloden was a lot — too much at some points — and I just couldn’t muster the interest to continue. The television show, though, did a fairly good job explaining how and why these events happened, which is why I ultimately decided to return to the novel. That, and how wonderful I find Porter’s narration to be.

Having now finished the novel, I can also say that he television show did a good job whittling down the story to the key plot. Gabaldon can be quite long winded, and I felt my interest waning at particular points as I listened to the audiobook. (Even the ending, which is supposed to be action packed, was rather slow).

Yet, Claire and Jamie’s relationship is so wonderful that I was glad to experience it in its original, written form. And I also feel more informed for the debates I’ve seen on the racist troupes Gabaldon uses for her Chinese and black characters, which I find I agree with now having read this novel.

But, overall, it was a mixed bag with the true perfection being Porter’s narration. There aren’t many audiobook narrators who can handle such a large cast of characters or keep my attention for nearly 44 hours.