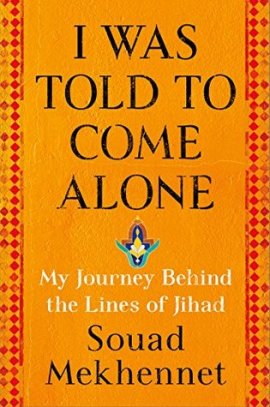 Subtitled “My Journey Behind the Lines of Jihad”, Mekhennet’s memoir begins with a recounting of her childhood in Morocco. Born in Germany, Mekhennet was sent to live with her grandmother in Morocco while her mother and father worked as a cook and cleaner, respectively, in Germany.

Her exposure to the language and to her family’s history as Muslims in North Africa may have set her apart from her classmates in Germany, but it allowed her to pursue a career as a journalist and follow her desire to understand why a few Muslims around the world carry out a violent form of jihad against the West.

This desire grew out of hearing a woman whose husband was killed on 9/11 ask why no one told her or her fellow Americans that there were people out there who hate them. And the rest of the memoir recounts a particular year and a particular event that Mekhennet covers as a journalist, including the lead up to the American invasion of Iraq in 2003, the 2015 attacks in Paris, and the 2016 Brussels bombing.

“Watching her, I was filled with anger and guilt. Anger because it seemed we hadn’t learned much from the suffering of the past fifteen years. Guilt because it was part of my job to give people clear information that could help dispel racism and fight violence, and I, along with other journalists, had clearly failed. This shooter stood for all those people I’d come across who killed because they had created their own ideologies of hatred and, in their sick minds, a justification for taking other people’s lives.”

In the latter event, Mekhennet’s reporting lead to the world learning that a Muslim women was the one who led police to the bomber, and Mekhennet talks about how important such a fact is to her as a Muslim woman because she believes it answers the question of why Muslims don’t stop these attacks. They can, and they do. (They also are killed in far greater numbers than those in Europe and America, but rarely receive any news coverage.)

Mekhennet has lead a fascinating life, yet the more fascinating aspect of her memoir is her view on why people — particularly second generation Muslim immigrants in Europe — are drawn to commit these attacks. In her view, these violent versions of Islam are attractive because they offer a community and purpose that people marginalized by European society do not experience.

And, in a similar vain to the explanation offered for why some Americans are drawn to Trump, they don’t want to hear the truth. They only want to hear their truth. That is, their experiences — of racism, of discrimination, of alienation — color their view of the world and lead them to a cycle where they constantly see themselves as the victim.  Yet, “people who see themselves as victims sometimes don’t notice when they become oppressors.”

Mekhennet also takes a critical view not only of America’s war in Iraq, but of the insistent of Americans and Europeans that democracy should be spread to the Middle East. It’s not that she doesn’t believe that Muslims should have to the right to elect their own representatives.

“Is democracy really what we want, or do we instead seek to promote the values we hold dear: the equality of men and women, the rights of minorities to survive and thrive, the freedom to speak our minds and practice whatever faith we choose? Instead of talking about the need for a voting system, we should seek to adhere to a code of universal values.”

Rather, she sees the forced acceptance of this governmental system pushed without recognition of the history of majority-minority and Shia-Sunni relations in this region. Pushing a voting system rather than working to promote positive values within Islam will fail to prevent the rise of totalitarianism, as seen in the wake of the Arab Spring.

“If I’ve learned anything, it’s this: a mother’s screams over the body of her murdered child sound the same, no matter if she is black, brown, or white; Muslim, Jewish, or Christian; Shia or Sunni. We will all be buried in the same ground.”

Certainly a tremendous amount of food for thought in this memoir. I have a subscription to The Washington Post where Mekhennet is a reporter and I recall reading some of the articles she mentions, but I certainly plan to follow her more closely after reading her memoir.