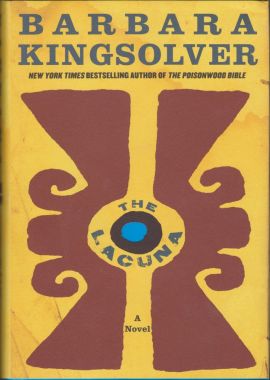 Young Harrison Shepherd is taken to Mexico by his mother in the late 1920s as she follows her heart — and her goal of marrying a more interesting and wealthier man than Harrison’s American father. There, Harrison falls in love with writing stories and keeping a diary of his experiences of his life in Mexico, of the Depression Era riots in Washington D.C., and of working for exiled Soviet leader Lev Trotsky.

When Harrison moves back to the U.S. prior to World War II, his friendships with Mexican artists Diego Rivera and Frida Kahlo land him the role of art mover for the U.S. government. A role and a friendship that later — when he has become a famous novelist — casts him under a cloud of suspicion by the Senator McCarthy and the House Un-American Activities Committee.

The story is sweeping in scope and scale, covering nearly fifty years in Harrison’s life and alternating narrators as Harrison’s diaries and correspondences are lost to time. As a result, my interest ebbed and flowed — some time periods and some narrators more interesting than others — and it took me nearly 100 pages before I felt truly interested in Kingsolver’s novel. (If the book hadn’t been selected by my book club for our October read, I likely would have given up before hitting 100 pages and moved on to something else.)

Interestingly, it wasn’t Harrison who finally peeked that interest. Rather, it was his observations of two eventually famous World War II Generals leading the charge against Americans camped on the National Mall and demanding payments promised to them for their service during World War I. And when that scene ends, when Harrison goes back to Mexico, my interest waned until he fosters a friendship with Rivera, Kahlo, and Trotsky.

Harrison becomes a window into the lives of these historical characters, into the complicated relationship the United States has with the communists allied with them during WWII. It is window rather than the character that pulled me through the rest of Kingsolver’s novel.

The rich imagery normally painted by Kingsolver’s writing is missing from this novel. Frankly, Harrison is one of the blandest male characters that I have ever encountered. And, ultimately, the novel can best be described as interesting yet underwhelming and, I fear, quickly forgettable.