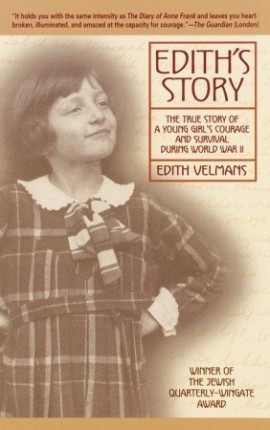 Subtitled “The True Story of a Young Girl’s Courage and Survival During World War II”, Velmans’ story begins in the 1950s with the birth of her twin daughters at a hospital in the Netherlands. She shares her hospital room with Miep Gies, the woman who hid Anne Frank and her family from the Nazis and returned Anne’s diary to her father at the end of the war.

Gies and Velmans end up discussing the war, which reminds Velmans of the diaries and letters she kept during her own childhood as a Jew hidden from the Nazis. This reminder sets up the memoir to jump backwards in time to before the start of World War II when Edith was a young teenager concerned about drama club, schoolwork, and her growing interest in boys.

Unlike Anne Frank’s diary, Velmans’ diary is shared intermittently in this memoir rather than printed in its entirety. Between passages from her diary or from traded letters, Velmans elaborates on how she felt during the time period, what was occurring across Europe, and what she has since learned in hindsight. Thus, the book reads like an interview or one-side conversation with Velmans.

This style may not have been what I expected, but the additional information really helped add color and background to Velmans’ story. When she went into hiding with friends of her boyfriend’s family, Velmans’ parents forbid her from keeping a diary. She held onto their letters and reprints them here, but the letters were written in code with familial relationships changed (i.e. uncle becomes brother) and new nicknames used to identify people. The footnotes would have been significantly longer if Velmans hadn’t be able to explain in the text.

The insertion of additional information is also a necessity given the times and the outcome of the war for Velmans’ family. While she was able to hold onto their letters; the ones she sent them were lost or destroyed. Even if Velmans had been able to recover the letters after the war, though, I imagine they would not have painted a true picture of her experiences.

Velmans’ mother was in the hospital was a broken hit; her father was diagnosed with jaw cancer soon after she went into a hiding. She admits that she was trying to put on a brave face for them both, and the one letter that did survive — the one she sent her father days before he dies telling him it is okay to let go because she (and her brothers will be okay) — is heart-wrenching to read.

Beyond this letter, what stood out to me about Velmans’ memoir was how slowly things changed for her. People tend to forget (or fail to realize) that the Germans did not immediately invade other countries and deport Jewish citizens to concentration camps. Instead, they slowly stripped Jews of their rights and abilities to function as members of society.

Like any teenager, Velmans’ primary complaints at the start of the war are about curfews and bicycles being seized by Nazi authorities. And, even as Velmans’ parents hastily made plans for their two children to go into hiding, the family remains convinced until the end that a certificate issued by Hitler saying the family had lost Velmans’ uncle in World War I would protect them.

This memoir is well-written and engaging and would be worth reading on those merits alone. What sets it apart from other memoirs from this time period, though, is the way it captures the slow process employed by the Nazis to “other-ize” the Jewish populations of Holland, Germany, and other lands. It’s one of the few I’ve read that really captures this aspect of the Holocaust.

This is my thirteenth book for #20BooksofSummer. My mom picked it up for me at a used book sale in Montana in 2016.