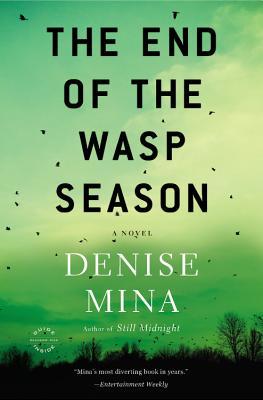 Outside of Glasgow, a young woman is murdered in the home she inherited from her mother after a trip to New York. Inside the home, Detective Inspector Alex Morrow is shown thousands of Euro notes tapped to the underside of the dining room table. The murder doesn’t appear to be a batched burglary that the responding officers originally believed it to be.

On the eastern coast of Scotland, a fifteen-year-old boy named Thomas Anderson is flown home from his expensive boarding school after his father, who lost both the family fortune and the life savings of hundreds of families, commits suicide. His parents have always kept him at arms length; his sister has always been the source of jealousy and hatred. In the fallout of his father’s death, Thomas has to face the secrets his parents have kept from him and the one about the murder outside Glasgow that he’s keeping from them.

Mina’s novel alternates back and forth between Morrow and Thomas. Half the book follows DI Morrow as she tries to solve the murder and grapples with her personal history in the area after one of the suspects turns out to be a close childhood friend. The other half follows Thomas as a way of explaining the “why” for readers who already know the who and the how that Morrow isn’t privy to.

This novel starts out slow, and it takes some time to find the hook, possibly because this is the second book in the series and Morrow’s family problems were already established for readers of the first novel. After a slow start, though, DI Morrow eventually won me over with her animosity towards office drama, her family issues, and her investigative process. The crime/mystery genre is so dominated by borderline alcoholic male detectives that it’s refreshing to see a (pregnant) female detective be the smartest one in the room.

It is also refreshing to read a book where an author’s attempt to humanize a murderer actually works. Too often such efforts are stilted or feel like excuses rather than explanatory, but Mina documents all the problems in Thomas’ life while still showing why the reader shouldn’t cry for him. It’s a psychological study that works, that keeps the book interesting despite the lack of mystery surrounding the crime.

The only aspect of this book that I’m still not sure about is the ending, which I only mention because the final scene is the source of the novel. Mina ends the novel with Morrow having made her arrest and Thomas waiting to stand trial, but uncertainty is inserted into the conclusion and I’m still ruminating on what that could have meant if Mina followed the crime through the trial rather than to the end of the investigation.

That said, there are four more books in this series as well as two more series by Mina, including one following a woman through the Glasgow newspaper industry during the 1980s and 1990s. Based on my experience with The End of the Wasp Season, I’m eager to follow more of Morrow’s investigations and give the other series by Mina a try.

This is my twelfth book for #20BooksofSummer. I can’t recall when or where I purchased this book. It was likely an impulse purchase at a used book sale.