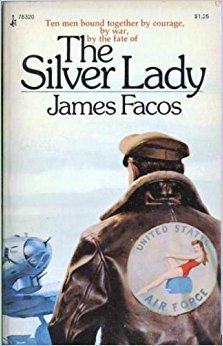 In March 1944, ten American men are assembled together at a military base in England to serve as the crew piloting The Silver Lady during aerial bombing runs over France and Germany. The men are led by Lieutenant William Starrett, whose belief in comradely and cohesion is tested by the presence of two gunners, Sgt. Mitch Hagen and Sgt. Tom Wyatt.  Neither man is willing to discuss his past; neither man warms to Starrett’s efforts to get to know him.

“…except, now and then, those moments — flying — looking out over the world from clean miles of wind above it: moments he knew he needed to keep him going, the way he needed space and light and motion, the excitement — even the fear — that made him know he was alive: moments he felt — and almost knew — that there was a way out, if only he could find it — if only he had time — Time –” (pg. 156-157)

Wyatt’s hesitation is driven by his religious convictions. Raised as a Quaker, Wyatt has enlisted against the wishes of his parents and the tenants of his faith. Hagen’s hesitation is due to the scars of war, to the way he and the others aboard The Lady face death each time they fly across the North Sea. To get to know the others in his crew would open himself up to pain.

“I’m afraid to love again because I’m afraid of being hurt again. And you’re afraid — simply to love, because you don’t know what love would mean to you.” And suddently she laughed, facing him, silvery in the moonlight. “It would mean freedom for you, if only you knew it. All the freedom and wonder you could handle. And you could love, Hagen, if only people — somewhere — mean something to you.” (pg. 207)

Nearly two years ago, my dad handed me this book and told me I had to read it. He had been given the book by his mother and after years of being unable to locate a copy, my mom had managed to track one down for him. I wasn’t in the mood to read a war story at the time, and I placed the copy in my to read stack for another day.

I did try to read the book last year, but was advised against it by Dad, who promised it was too sad of a read for the moment. It was probably too sad for this moment, but Facos’ novel was also one of those books that completely took me by surprise.

Although I was determined to read the book before seeing my dad for the Fourth of July holiday, I meandered through the first hundred or so pages unsure if the book was going to be for me. Yet somewhere around the time Wyatt met Joy Cheyne, a young Englishwoman, while on leave in London and dragged Hagen along to fill out a foursome with Joy’s former sister-in-law, I started to become gripped by Facos’ writing.

“What if he (and Uncle Seth) had been wrong, and death was the end of life; and life was only this instant of time here on earth? And what if he should die now, this young, when he might have chosen differently? Was he right to do as he had done, to be here now on the eve of combat? What if this was the All of it, and he was flinging that All away for a principle, an ideal, that had been in reality not an insight but a delusion, a trick of the mind only, a rationalization?” (pg. 34-35)

It wasn’t so much the love story between Joy and Wyatt that pulled me in. Rather, it was Facos’ focus on how war and, therefore, death affects the individual. Wyatt feels called to serve out of a sense of patriotism and duty, but the death of his fellow servicemen — sometimes as he watches helplessly from another airplane — forces him to confront how the teachings of his faith may  not be true. How life and, therefore, his relationship with Joy may be all too fleeting.

Hagen, for his part, believes that death is inevitable and life is short. But he takes the opposite reaction of Wyatt, closing himself off to the people around him to the point where Starrett threatens to expel him from The Silver Lady. Without giving too much of the ending away, his final moments in the story were poignant and elevated my estimation of my novel.

I can understand and, more importantly, appreciate why my grandmother passed this book onto my dad and my dad passed it along to me. It’s a shame that Facos’ novel has gone out of print and few people have the opportunity to experience it.

This is my fifth book for #20BooksofSummer. As I mentioned above, my dad loaned me his copy about two years ago and asked me to read it. Thanks for sharing it with me, Dad! Better late than never.