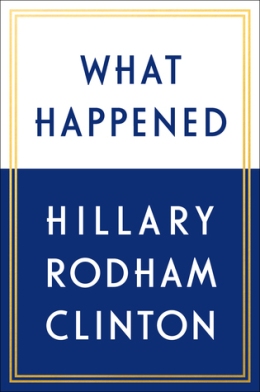 Hillary Clinton received three million more votes than her opponent — a man who was vulgar, violent, and unqualified to be President of the United States — in the 2016 Presidential Election. Yet he won the 70,000 or so votes in Michigan, Wisconsin, and Illinois needed to win the Electoral College, and Donald Trump became the 45th President of the United States. So what happened?

At this point in 2018, I think we all know what happened: FBI Director James Comey injecting his beliefs into the political arena; the press’ relentless focus the non-story of Clinton’s emails; Russian interference though social media and other avenues still under investigation; and Clinton’s personal failings as a candidate. And, frankly, I wasn’t planning to read Clinton’s memoir of this cataclysmic event because I felt like I understood what happened and why.

Soon after the book was published, though, people in my life (and in the media) started asserting that the best thing Clinton could do was keep quiet and continue on her walks in the woods. That her failure to be elected meant her experiences and thoughts on the 2016 election should hold zero weight in the conversation about how the Democratic Party should retool in order to win in 2018 and 2020. That she never took personal responsibility for her failings as a candidate.

“Every day that I was a candidate for President, I knew that millions of people were counting on me, and I couldn’t bear the idea of letting them done. But I did. I couldn’t get the job done, and I’ll have to live with that for the rest of my life.” (pg. 46)

That last assertion is categorically false. Clinton spends a large chunk of the book rehashing how, in hindsight, she wishes that she hadn’t set up a separate email server. Other Secretaries of State may have done so in the past, but she should have known that the rules of politics are different for her. (Both because she’s a woman and a Clinton.)

“We all want — and the political press demands — a ‘story line’, which tends to cast people as either saints or sinners. You’re either revered or reviled. And there’s not juicier political story than a saint who gets unmasked as a sinner. A two-dimensional cartoon is easier to digest than a fully formed person.” (pg. 47)

She wishes that she hadn’t made the comment about all Trump supporters being deplorable. The comment was, of course, taken out of context, but the damage was lasting and a good example of how Clinton must be measured and careful with her words. (The same rules, of course, don’t apply to Trump.)

In hindsight, I should have known she lost the moment that comment was made. It had the same ring to it as the one Mitt Romney made during the 2012 Presidential Election about how 47% of Americans would vote for Obama simply because they believe they are entitled to government assistance. In the moment, though, I thought the comment Clinton made was bad, but nowhere near as deplorable as the comments Trump made when he announced his campaign or throughout it. I thought she could have survived it.

“For Trump, if everyone’s down in the mud with him, then he’s no dirtier than anyone else. He doesn’t have to do better if everyone else does worse.” (pg. 108)

And she might have had it not been for the emails and Comey’s decision to discuss the investigation into Clinton and not into Trump. Or her candidacy might have survived it had it not been for the interference of Putin and Russia. Both topics are covered at length, and Clinton provides one of the most concise overviews of why Russia would mettle and how they set about it that I have found to date.

However, her thoughts on “change” in America as the true crux of ‘what happened’ to be the more intriguing portions of her memoir. In her view, the American people’s fixation of change — the slogan of Obama’s campaign in 2008 was “change we can believe in” —  is indicative of the history of this country. That we desire change that gives us hope.

“Change might be the most powerful word in American politics. It’s also one of the hardest to define. In 1992 and 2008, change meant electing dynamic young leaders who promised hope and renewal. In 2016, it meant handing a lit match to a pyromaniac. The yearning for change springs from deep in the character of our restless, questing, constantly-reinventing-itself country. That’s part of what makes America great. But we don’t always spend enough time thinking about what it takes to actually make the change we seek. Change is hard. That’s one reason we’re sometimes taken in by leaders who make it sound easy but don’t have any idea how to get anything done. Too often we fail to think big enough or act fast enough and let opportunities for change slip away. Or we don’t have the patience to see things through.” (pg. 195)

In the case of the 2008 election, the hope was that our country could put its racist past behind it by electing an African American president for the first time. In 2016, the hope — it turned out — was that our country’s leaders would change. That they would stop being beholden to corporate donors which gives, at the very least, the illusion of corruption (hence why Clinton’s speaks to Wall Street were such a big deal) and start returning America to country it was in the 1950s when the middle class was booming and people had solid, steady jobs.

In both instances, as Clinton says, Americans didn’t want to do the work. We haven’t had the truth and reconciliation moment needed to address the racism in this country. Nor have we voted for leaders and tax increases needed to improve schools, infrastructure, and other conditions that helped power our 1950s economy.

Trump said he was going to make America great again, but he never said how. Yet, for many Americans, that slogan captured their desire for change and their hope without telling them they had to do any work. Clinton’s slogan of “Stronger Together” insisted that people would have to put in some work, that they would have to stop looking for out for just themselves, that things weren’t going to be easy.

Yet, for many, the easy way is the preferable way, and that plus the emails and the foreign interference and the personal failings of her candidacy meant Trump became president and Clinton wrote a memoir.

I wrote on GoodReads after only 27 pages that “I still feel the pain of her loss so strongly that reading this feels like reopening wound. Not sure how far I’ll get with it”. I mourned through the majority of this book, and I cried at several points because, once again, a smart, articulate woman lost to the anger and lies spewed by an unqualified man. But I am glad I read it; I needed the cathartic release this book offered. I hope it offered such a release for Clinton, too.