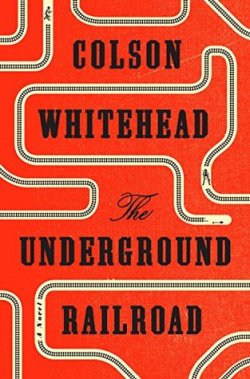 Whitehead’s novel won both the 2017 Pulitzer Prize and the 2016 National Book Award, the first novel to do so since 1993. It also won the Arthur C. Clarke Award and the 2017 Andrew Carnegie Medal for Excellence, and was longlisted for the 2017 Man Booker Prize. Given this lavishing of praise and accolades, I added Whitehead’s novel to my to-read list but shied away from picking up the novel until I felt like most of the buzz had died down. (I also shied away because I didn’t like — or even finish — the only other novel by Whitehead that I’ve read.)

The novel follows Cora, a slave on a cotton plantation owned by the Randall brothers in George, as she makes the decision to follow another slave named Caesar, one of the few slaves on the plantation who is kind to Cora, to freedom on the Underground Railroad. Those familiar with the historical railroad know that “railroad” is a figure of speech for how slaves were moved from safe house to safe house until the reached non-slave states in the North. (And, even then, they weren’t safe from being returned to slavery thanks to the Fugitive Slave Act of 1850.)

In Whitehead’s novel, though, the Underground Railroad is a real railroad — a locomotive runs from George in the Deep South through South and North Carolina to non-slave states in the North. This isn’t the only example of Whitehead blurring timelines and historical fact; the forced sterilization and syphilis experiment on blacks in America begins about sixty years earlier in Whitehead’s narrative. (The Tuskegee syphilis experiment began around 1932; Whitehead’s novel is set prior to the break out of the American Civil War in 1861.)

“And America, too, is a delusion, the grandest of all. The white race believes — believes with all its heart — that it is their right to take the land. To kill Indians. Make war. Enslave their brothers. This nation shouldn’t exist, if there is any justice in the world, for its foundations are murder, theft, and cruelty. Yet here we are.” (pg. 285)

While the novel is largely told from Cora’s point of view, different characters who either aid or hinder her journey to freedom are given a chapter to explain their motivations. Among those characters are Ethel the reluctant participant on the Underground Railroad whose activities are uncovered by her neighbors; Ridgeway the slave hunter; and Mabel, Cora’s mother who ran off on the railroad decades before without her young daughter. What happened to Mabel haunts Cora and the narrative, and the novel is almost as much about Cora making peace with her mother’s actions as it is about her efforts to runaway.

“Was she out of bondage or in its web: how to describe the status of a runaway? Freedom was a thing that shifted as you looked at it, the way a forest is dense with trees up close but from outside, from the empty meadow, you see its true limits. Being free had nothing to do with chains or how much space you had.” (pg. 179)

In this novel, Whitehead’s writing style shines. I highlighted a number of passages — far too many to share here — that caused me to pause, that I either immediately applauded or had to mull over further to understand his point. One particular struggle that Whitehead weighs in the novel is how people are sold on this idea that the long arc of history bends towards justice.

“He told her that every one of her enemies, all the masters and overseers of her suffering, would be punished, if not in this world then the next, for justice may be slow and invisible, but it always renders its true verdict in the end.” (pg. 280)

Yet how long can a person wait for that bend? And when justice comes, what does it look like? Freeing the slaves yet making restitution payments  to whites for the lost capital that freed slaves constitute to them? Or, an eye for an eye? If a slave like Homer is freed, but only knows slavery and has no support to change his life, what can happen to him? Slavery is horrid and evil; the conditions and racial biases that encouraged it to happen are ones America still struggles with today. And Whitehead clearly tries to point that out, even as he sets his novel in the past.

His decision to include a literal railroad may have originally struck me as odd, but I’ve seen others describe it as a clever way to point out the role of slavery in America. After all, whoever built the railroad did so literally right under the feet of the whites in power and kept it going despite sub-par materials (the locomotive barely holds together from one station to the next). It is, as one reviewer on GoodReads put it, “a powerful metaphor of how much slaves did for America, and how much of [that work] is hidden”.

The novel isn’t entirely without fault, though. The only character Whitehead takes the time to develop is Cora. The rest are either caricatures of how one expects a slave catcher to behave or are given such fleeting chapters that their stories end just as the reader is starting to understand their idiosyncrasies (Ethel probably being the best example). Generally, the praise lavished on this novel is well-founded. It is a difficult novel to read due to its subject matter, but certainly one I’m glad I finally stopped waiting to pick up.