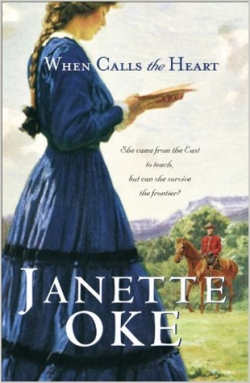 One of my (not so) guilty pleasures these days is watching the television show ‘When Calls the Heart’ on the Hallmark Channel. The show is sweet and kind, and any anguishing problem is solved by the end of the ten episode season — if not in one episode. Since the show has been such a nice break from the police procedural or dramas I normally watch, I thought I’d try reading the source material, which was written by Janette Oke back in 1983.

The basic premise of television show follows Oke’s novel; a young school teacher from eastern Canada named Elizabeth Thatcher is sent to teach in a one room schoolhouse in the Rocky Mountain West. Born wealthy and accustomed to servants catering to her needs, Elizabeth must adjust to life as a frontier woman, but she quickly endears herself to her pupils and their families. But the similarities between the two largely end there.

On the show, Elizabeth is willingly travels west to become a teacher in Coal Valley (later renamed Hope Valley) much to the chagrin of her parents and older sister. In the novel, Elizabeth is sent west first because her mother wants her to have a relationship with her older half brother, who lives in Calgary. (No brothers on the show.) And then is sent further west to Pine Springs when she spurs the marriage proposal of the school supervisor. (The show pursues this plot in season four, although the rejected proposal is why Elizabeth loses her job rather than her reason for coming to the town.)

I could go on and on about the differences, but I expected there to be some difference between the television show and the book and none of the ones I listed really impacted my enjoyment of the novel. Rather, it was the pacing that plot that soured me on it. Over three-fourths of the novel is dedicated to setting the scene, to introducing Elizabeth and her first year with her students. Then, in the final third, Wynn and Elizabeth go from barely interacting to confessing their love for one another.

Which makes Oke’s novel possibly the fast-paced romance novel I’ve read (and it makes the two seasons the show takes to reach that point feel like an entirety). Wynn claims he was interested in Elizabeth for months, but the reader is told this rather than shown it. And Elizabeth spent so much of the novel convinced Wynn was married and refusing to talk to him that her leap to loving him seems absurd. Thus, I finished the novel feeling like I didn’t at all believe either of them was truly interested in the other, which is the exact opposite feeling I get from the television show.