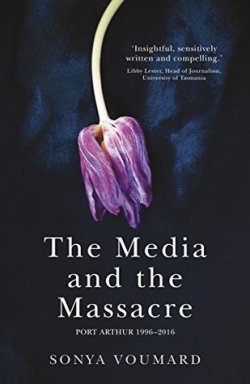 On April 28, 1996, a twenty-eight-year-old from a suburb outside of Hobart, Tasmania murdered two individuals at a guest accommodation site that his father had wanted to purchase. The man then drove to Port Arthur, a tourist site and former convict prison colony, and murdered 33 people and wounded 23 before being captured by police the following day. The Port Arthur massacre was the deadliest mass shooting in Australian history and among the worst in the world.

As a non-Australian (and a child at the time of the horrific crime), I cannot name the time or place I was when I first heard about the massacre. As an American, though, I often hear the massacre mentioned after yet another mass shooting in America. If Australia could pass strict gun control laws following Port Arthur, why can’t America?

That is not the question Voumard attempts to address in her book. Rather, she examines the reactions of the media to the event centering much of her analysis on a 2009 book titled Born or Bred? by two journalists, Robert Wainwright and Paola Totaro. Their book tried to place blame for the massacre on either the genetic make-up of the murderer or on the way Martin Bryant was raised.

“As the mother of a massacre’s perpetrator, Carleen is expected to acknowledge Martin’s guilt and to show remorse on his behalf. By not doing so unequivocally, she joins the ranks of society’s least popular causes: she is an unyielding female victim. Who would bother standing up for her?”

Either way, these two journalists placed the blame on his mother, Carleen Bryant. With the aid of a friend, Bryant had contacted Wainwright and Totaro to help write a memoir about her life. She provided photographs and her own personal manuscript to Wainwright and Totaro and, after the relationship between herself and the journalists soured, she asked for the manuscript back. Instead, portions of the manuscript were used in the book, and Bryant would later receive an undisclosed legal settlement for its use.

There are always two sides to any story, and Voumard attempts to suss out exactly what happened between Wainwright and Totaro and Bryant. Both parties refuse to speak to her, however, and she ends up relying heavily upon published interviews or friends and lawyers to establish the timeline of how and when consent (or lack thereof) was given. The controversy over the use of Bryant’s unpublished manuscript is then used to launch into a larger examination of how journalistic misconduct is (or is not) dealt with in Australia, if book journalism should be treated differently from periodical journalism, how the desire to nab headlines and sales (and, now, Internet clicks) drives this misconduct.

These questions about ethics and the media’s role in the public are what kept me reading Voumard’s book long after I realized one needed more than a cursory understanding of the Port Arthur massacre. (I have never read Totaro and Wainwrights’ book nor had I known about Bryant’s accusations against them.)

Much of what she says about the predatory nature of journalism rang true to me, and the circling around tragedy like vultures is actually why I decided against becoming a journalist. On my first day as a journalist for a summer internship at a major daily paper,  I called the country coroner for a cause of death ruling on a four-year-old child. On my second day, I was instructed to call the family and ask for an interview on the accidental drowning of said child. I knew right then that I didn’t want to be a journalist.

Granted, the singular death of a child versus a mass killing seemly invites different journalistic responses. Yet, in the end, each loss is a personal one for the family, and Voumard documents how journalists often fail to walk the precarious line between public interest and salacious interest. A line that is, of course, difficult to enforce under when one lives in a society with an ever so important freedom afford the press. A moral ambiguity that makes for interesting contemplation even after setting the book aside.

Voumard’s book was published nearly twenty years to the day after the massacre occurred and she — rightfully, in my view — spends some time on whether or not the media should continue to engage in a remembrance or a rehashing of events. One of her sources goes so far as to say that people should be left to move on with their lives after the ten year anniversary, and Voumard reports that the Port Arthur tourist site offers a brochure on the massacre with the caveat that it is too distressing for employees to speak of.

I did not set out to read this book around the anniversary of the Port Arthur massacre, but Voumard’s discussion of when the media and, therefore, the public should collectively move on ended up being timely for me in another way. April 15, 2017 marks the four year anniversary of the Boston Marathon Bombing and as a Bostonian, as someone who provides tours of a public site located near the bombings, the question of when the media and the public should move on is often raised for me. It sickens me when tourists ask me to point out the location of where the bombs went off just as I’m sure it sickens victims to be asked to relive their pain for the general public.

(And, least you think I’m wrong on that account, the father of the youngest victim was quoted in the media as saying that if he had to lose his child, he wishes it had occurred in a private fashion rather than at a public event that will occur each year and be associated with his loss forever. The family also asked that their son not be included in the Hollywood movie interpretation of the bombing.)

For all the gaps in my knowledge about the Port Arthur massacre and the media’s handling of the event both immediately and in the intervening years, Voumard’s book was still well-worth the time it took to read.

The Media and the Massacre was longlisted for the 2017 Stella Prize.