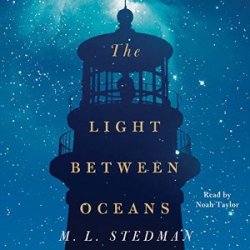 Stationed as the lighthouse keeper on Janus Rock off the coast of Western Australia, Tom Sherbourne and his wife Isabel live largely in isolation. Two miscarriages and one stillbirth have isolated the couple even further — both from their family on the mainland who are anxious for grandchildren and from each other.

The arrival of a battered on the shores of Janus Rock carrying a dead man and living infant is seen as a sign by the bereft Isabel, and she urges her husband to go against his training from the Commonwealth Lighthouse Service and the morals he clings to after all he’s seen in World War I. Tom buries the body; Lucy adopts the infant and names her Lucy.

Two years after her arrival, the Sherbourne family return to mainland Western Australia with plans to introduce Lucy to their families as their daughter and christian the child. There, they learn of a young woman by the name of Hannah who is still grieving over the disappearance of her husband and the baby girl they named Grace. Gossip trails Hannah wherever she goes — community members claim her husband, a German-speaker hated for his supposed role in World War I, ran off with the child for his native Austria — and the what ifs are driving her mad with grief.

Far too often, a novel will introduce a complex situation and leave the reader in a grey wasteland without an answer. Should baby Lucy be returned to her birth mother? Should Tom and Isabel be charged with kidnapping? Should war and grief be acceptable excuses for peoples’ crimes?

Thankfully, Stedman introduces this complex situation and then follows through with the fallout. It is apparent that someone will lose, but who the someone is and the reaction of the community at large to their loss moves this heart-wrenching tale far away from the unbelievable place it begins. It is a period of adjustment for Lucy, Hannah, Isabel, and Tom; it is a period of mourning for all. And Stedman handles each character’s point of view and reaction to the situation with care. With an attention that makes this a far more extraordinary debut than the writing style original suggests.

And, despite the distance both in time and space from World War I, Stedman never allows the war to stray from the reader’s mind — just as it would have been for real Australians in 1926. There are the shattered, debilitated men who are lost to their communities and the guilt of those like Tom who came back — at least, physically — in one piece. There is the anger and the resentment over lost children — brothers, sons, and husbands — in war manifesting itself in both the xenophobia directed towards Hannah and her husband and the relationship between Tom and Isabel, Tom and Lucy.

The novel does occasionally switch from past to present tense for no discernible reason, which added some complication to listening to the audiobook as read by Noah Taylor. I would often have to rewind in order to ascertain if the novel had suddenly switched back in time (it hadn’t). And there was also an issue with the sound mixing. I would jack up the volume for one part — Taylor has a tendency to mumble — and then have to scramble to turn it down when he started screaming at me in the next part. The novel was worth dealing with all the audiobook’s idiosyncrasies, but I still wish I had read the print version instead.