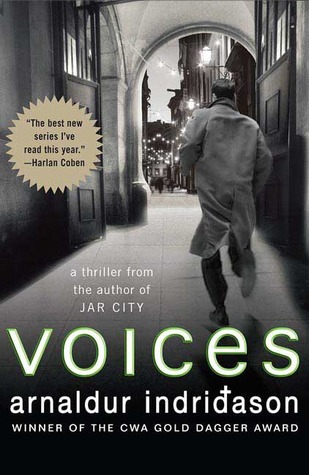 Inspector Erlendur Sveinsson is called to one of the grand hotels in Reykjavik to investigate the murder of the hotel’s Santa/handyman/doorman named Gulli, who was found dead in his basement apartment with his pants around his ankles. The hotel staff insists the old man was an unwanted addition to their ranks – a washed out doorman who was to be fired at the end of the Christmas party – and demand Erlendur keep mum about his investigation in order to keep from scaring away guests during the busy holiday season. The international guests, however, provide Erlendur with a range of suspects as he begins to investigate into the victim’s past as a young choir boy and reconcile with his own tragic past.

As typical with Indriðason’s novels, Erlendur’s colleagues, Elinborg and Sigurdur Oli, are occupied with solving another crime. The police were alerted to the case of a young boy who was viciously attacked by his classmates. His father insists he arrived home to find a trail of blood leading to the young boy’s bedroom where he managed to drag himself after the attack, but Elinborg is convinced the father is the culprit and the young boy is too afraid to tell the truth.

A couple of years ago, I read a nonfiction book about how people become obsessed with collecting things – butterflies, rubber bands, Beanie Babies – and how that obsession comes to dominate their lives. Recordings of young, choir boys — the focus of this novel — has to be in the top ten of weird collections, no? Certainly, my mind seems to think so as it’s been over four months since I finished this one and I’m still thinking about it!

Erlendur’s efforts to solve the murder is spread out over five days during the Christmas season, and the novel is broken into five sections representing each new day. During these five days, the inspector moves into the hotel in order to remain close to the scene of the crime and the hotel guests, whom Erlendur suspects the murderer is among. The neutral setting, however, allows Erlendur to begin working on his strained relationship with his daughter Eva Lind, a recovering drug addict, as the case allows him to learn about her past and affords her the opportunity to inquire about Erlendur’s childhood.

Having read this series out of order, I know a fair amount of Erlendur’s childhood and, therefore, missed out on the slow reveal and heavy dose of suspense this novel offers. So, for me, this was the weakest aspect of the novel, but this aside is perfectly interwoven into the larger narrative of how the sudden end of one’s childhood contributes to their choices in the future — Erlendur’s choice to become a detective, Eva Lind’s drug addiction, Gulli’s life before his tragic death, the little boy and his father.

And, once again, I found myself turning the last page impressed by how Indriðason expertly juggled these three narratives over the course of the five days during which this novel is set. At no point do the narratives become too heavy handed or begin to overshadow each other, and he still managed to keep me on my toes as to why these crimes happened even if I already figured out the ‘who’.