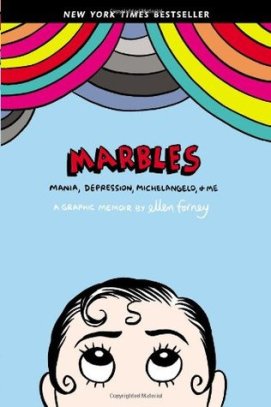 Subtitled “Mania, Depression, Michelangelo, and Me”, Forney’s memoir chronicles her diagnosis with bipolar disorder, her attempts to find the right formula of medication, and her struggles to reconcile the source of her creativity (which Forney believes to be her manic phases) with her identity as an artist.

She spends some time detailing the famous artists who were either diagnosed with or believed to have bipolar disorder – Vincent Van Gogh, Ernest Hemingway, Sylvia Plath, etc – and the way these artists were institutionalized as they cycled through depression to mania and back again or made multiple suicide attempts as she debates medication versus creativity.

This deeply personal memoir addresses a subject often spoken in hushed whispers with such humor and wit that even in her darkest moments, Forney manages to make her readers see the spark of creativity lurking beneath. There is something so beautiful about the candid and frank way she discusses mental health, sexuality, growing older, and the changing of friendships that accompany every major shift in an individual’s life.

The style of her drawings follow the swings of her bipolar disorder – crazy jumbles at the height of her mania, listless pencil drawings during the deepest part of her depression – and I particular enjoyed her use of darkness and light to represent these so-called phases. One of the most poignant panels in the comic was the distorted shape of her own hand – dark and clawed versus light with fingers curled into an okay sign – as she asks:

“Is bipolar disorder a curse, a source of misery and pain? A dangerous, often life-threatening disease? Or an inextricable even essential part of many creative personalities? A source of inspiration and profound artistic work?”

The way she frames this question, the way she places it in the context of other artists helps to capture the fear such a diagnosis can bring. I started recommending this book to friends even before I finished it because I just loved the way she handled the topic and the way her drawings compliment and contradict her topic. A great example of how comics can be a medium for topics normally considered forbidden and misunderstood.