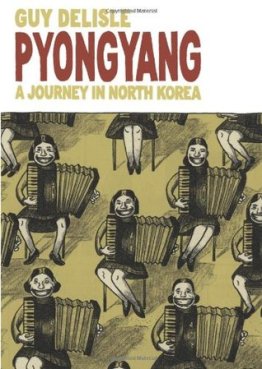 North Korea, often referred to in America as part of the “Axis of Evil”, is one of the most secluded, mysterious, and poorest nations in the world. Hired by a French film company to oversee its animation office in North Korea, Delisle spent months living in one of the country’s few hotels and traveling around the city with a translator and a guide.

These two people were tasked with keeping Delisle away from the North Koreans, away from any narrative that does not conform to the image put forth by the statues, portraits, and propaganda of the country’s leaders, Kim Il-Sung and his son Kim Jong-Il – the world’s only Communist dynasty.

Delisle brought along a copy of Nineteen Eighty-Four – his only source of non-state sanctioned entertainment – and much of the book draws comparisons between the fictional dystopian world of Orwell’s novel and the reality Delisle stepped into when he accepted this animation job. He is very decisive in his presentation of the country possessing little empathy for the people living under the regime or understanding that the regiment way they perform their jobs might be a response to knowledge they have about the regime that he does not. At one point, he schemes to shake off his guide and translator without concern that losing tabs on him might lead to grave consequences for his guide or his translator.

The way his translator and guide keep him secluded from the North Koreans – he works alone in an office, he stays in a hotel where only one floor is opened and filled with foreigners – may have contributed to this lack of empathy or understanding for the North Koreans. But while he points out how odd it is that his solitary walk through the city does not attract notice from a single North Korean, he does not offer them the benefit of the doubt that their lack of interest may be a tool of self-preservation. Talking to a foreigner without approval would likely be seen as a subversive action.

His black and white pencil drawings capture the starkness of Pyongyang, and I enjoyed looking over the small details he captured about the bizarre museums and monuments he was taken to. One museum is completely dedicated to the evils of life in Western countries yet neither his guide nor his translator had any interest in taking him to museum dedicated to the superiority of life in North Korea. Within these panels, he manages to both capture and respond to the propaganda being presented to him.

His travelogue provides interesting insight into the country and into the experience – separate, unable to converse with ordinary North Koreans – Western foreigners would likely have if they choose to visit. I also enjoyed his insight into globalization because who would have thought China would lose contracts to mass produce animation for a French company to North Korea? But the North Koreans work for less pay than the Chinese, although Delisle has very little praise for their work, and companies will do anything to reduce the costs of their inputs.