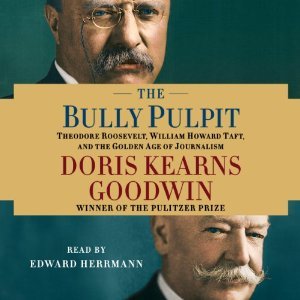 Subtitled “Theodore Roosevelt, William Howard Taft, and the Golden Age of Journalism”, Goodwin’s book follows the collusion of Taft and Roosevelt during the progressive era through the fracturing of their friendship, which culminated in their running against one another for president in 1912.

The book also highlights the role of “muckraker” journalists, particularly Ida Tarbell and McClure’s Magazine, in calling for the elimination of corruption in government, establishing the direct election of US Senators, and the regulation of monopolistic trust corporations through antitrust laws.

I finished Goodwin’s book with a profound respect for Taft’s wife, Nellie. She could easily be perceived as a shred, pushy wife who refused to leave her husband to his judgeship, but I rather admire the way she channeled her dissatisfaction with the limited roles of women and her interest in politics and history into furthering her husband’s career. By pushing him to accept the position at the Department of Justice, by encouraging him to run for the presidency, she opened up opportunities for herself to meet people and engage in conversations about complex political and economic problems of the day until, sadly, a stroke abruptly ended her social engagement.

I’ve also added a biography on Ida Tarbell to my to-read list based on her appearance in the text, which seemed rather short given the insertion of “The Golden Age of Journalism” into the subtitle. Goodwin tries to integrate the journalists of McClure’s Magazine into the narrative by asserting that Roosevelt and Taft manipulated the press to generate support for their legislative goals. Yet while Roosevelt invited journalists to ask him unfiltered questions while he received a shave, Taft largely shut the journalists out of the White House and rarely responded to their interview requests. The focus on the journalists was interesting to me as a former newspaperwoman and I would love to read a book on journalism during the Progressive Era, but it felt largely out of place within and constrained by the context of this book.

That said, Goodwin’s book is one of the most readable biographies I have encountered and makes Taft, who was presented as a real dud of a president during my American history courses, into one of the more interesting presidents the United States has had. He was passionate about returning self-rule to the people of the Philippines, is the only president to serve on the Supreme Court, and had the good foresight to marry Nellie. Roosevelt is, of course, a larger than life character in the book and his dedication to breaking up monopolistic trusts reads almost like an adventure novel. The government of the time period was also largely held hostage by corporations and the one percent, which parallels with events today, and Goodwin does not spare a kind word for these individuals or their monopolies.

She does, however, have a very “rosy glasses” view of Roosevelt – there is not mention of the Roosevelt Corollary and his horrific treatment of the people and countries of Latin America. And I was expecting a more detailed explanation as to why the friendship between these two men fractured so completely. I’ve heard before that their disagreement began over Taft’s refusal to follow Roosevelt’s political agenda after Roosevelt left office, but Goodwin explains that Roosevelt refused to dine with Taft after his swearing-in because doing so would suggest collusion and, oddly enough, Roosevelt and his wife largely stopped speaking to Taft and Nellie after the later did not host the Roosevelt children at the White House while their parents were in Europe. Their closest mutual friend, Major Archie Butt, also seemed to struggle to understand why the two men refused to speak so maybe Goodwin could not really find a firm explanation as to why?

Even without one, the book presents one of the most comprehensive and readable presentations of American life during the Progressive Era, which was largely a response to the Gilded Age. It also does not hurt that the audiobook is narrated by Edward Herrmann, who narrated many of the shows on the History Channel I loved as a child when the channel actually focused on history and also stars as Rory Gilmore’s grandfather in “Gilmore Girls”.