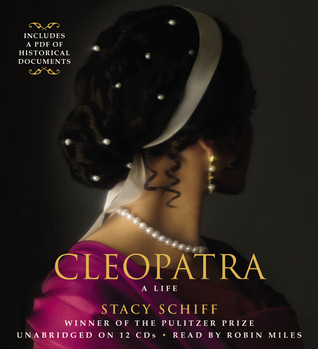 The last queen of Egypt has been re-imagined in history as a seductress by the likes of William Shakespeare, Michelangelo, and Elizabeth Taylor. Yet Schiff presents a woman who ruled an empire during a life that spanned fewer than forty years, who continued a family history of incestual marriages and assassination, and who had a relationship with the two most prominent rules of the day – Julius Caesar and Mark Antony.

Her relationship with Caesar resulted in a son – a challenge to the Roman line of succession – but it was her relationship with his protégé following Caesar’s death that upended the ancient world and confirmed her status as the most influential woman – if not, ruler – of the day. With Mark Antony, she would attempt to establish a vast empire across the Mediterranean to be divided amongst their three children earning the wrath of the Romans and the puppet rulers in the region.

I was rather surprised to learn how liberal Egyptian society of the first century B.C. was in regards to the rights and roles of their female citizens and rulers. An Egyptian woman could own property, choose her own husband (provided she wasn’t a ruler), grant herself a divorce, operate business, and own land. (In fact, up to one third of land in Egypt was controlled by women.) And, although Cleopatra was married to two of her brothers, she ruled in her own right and was largely beloved by her subjects in part because she was the first Ptolemaic ruler to learn Egyptian.

This is, of course, contrasted with the Roman society where women were not extended such rights, and it was no surprise to me that those documenting the time period or writing about the downfall of Caesar and Mark Antony would present Cleopatra as a jezebel, a seductress who enchanted the Roman rulers. Schiff states at the beginning of the biography that she wants to shatter this myth, which I had never even heard of before, so I found it curious that she would spend so much time romanticizing Cleopatra’s relationships with these two men. Obviously, these relationships changed the trajectory of her life, but there were several moments during her discussion of these relationships that I felt Schiff was playing into the stereotype she claimed to want to shatter.

This feeling was particularly strong when Schiff abandoned Cleopatra to cover the life and struggles of both Caesar and Mark Antony, which felt like an unnecessarily long divergence from the person who should have been the focus of this book. My focus began to wane at this point, and the novel ended on a poorer note for me than I assumed it would at the beginning as a result. Even so, I still learned a tremendous amount about Cleopatra, and I was intrigued by what she wrote enough to want to read more about this time period. Research that inspires research is always a plus in my book.

I’m currently debating the practicality of listening to nonfiction in audio format. I think the format works well for autobiographies and for nonfiction books where the author mentions their citations in text. In the case of Schiff’s biography, I do not think audio was the appropriate format as she rarely mentions her sources and I could not flip to the end to check citations.

On the rare instances where she does cite her sources in text, it is to tell us to reject the writings of Plutarch, although she later uses him as justification for what she claims as fact. Some of what she said also sounded like speculation no better than the myths Schiff was attempting to bust, and I cannot be certain if that is because of Schiff’s actual research or because of the format in which I read this book.