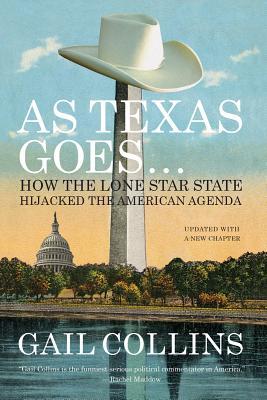 Having learned a substantial amount from Collins’ two prior books on the history of American women, I went into this book with both high hopes and high expectations – in particular, that she would attack the myths surrounding Texas with the same vigorous attention as she did the myths surrounding women like Betsy Ross. I am a product of the Texas public education system – kindergarten through twelfth grade in the same school district – and spent nearly fifteen years in the state. I paid my dues so to say, and I have no plans to ever return to Texas.

Yet even I was put off by Collins’ diatribe against the state because she made no effort to recognize how the insanity of local politicians does not reflect the views or opinions of all people in the state. After all, Collins begins her book by explaining how she grew up in Ohio, but I would not assume that John Boehner represents her political beliefs simply because they are from the same state.

“The way I evaluate history textbooks is first I see how they cover Christianity and Israel. Then I see how they treat Ronald Reagan — he needs to get credit for saving the world from Communism and for the good economy over the last twenty years because he lowered taxes.” (pg. 113)

She attempts to explain how a Texas-sized version of the 2008 economic crisis preceded the global financial meltdown and spends some time discussing how the Texas version of No Child Left Behind was translated to the nation as a whole. But her arguments are very superficial; obvious dots are connected and nothing of depth or substance is offered for the reader to consider.

Her chapters are also oddly broken up creating a rather jarring reading experience, and each one is a poor emulation of the opinion columns she is known for. (I kept expecting a reference to Mitt Romney’s dog Seamus despite Romney’s lack of connection with the state.) And while she attempts to address every single issue with Texas politics, her analysis never expands beyond the opinion that Texas is actually the devil’s playground, which is odd considering how easily her “analysis” can be expanded through a series of questions.

For example, Collins states towards the beginning of her book that the vast majority of Texans live in urban areas yet seem themselves as residents of wide open spaces. Could it be that the lack of public resources and assistance, particularly public transportation, fosters a feeling as though one is on their own? And because I am on my own and manage to get to work, pay for food and housing, and visit the doctor, I do not see a need for the government in my life, particularly if all they are going to do is regulate my gun access or teach my children something other than religiously-sanctioned abstinence?

The issues with Texas’ public health, education, environmental, and business policies and these policies deserve a much more rigorous and serious examination, particularly if the author is going to assert that all of the United States is following Texas’ lead, than Collins was willing to undertake. Hopefully, someone will eventually undertake such a study but I would suggest passing on Collins’ book during the wait.