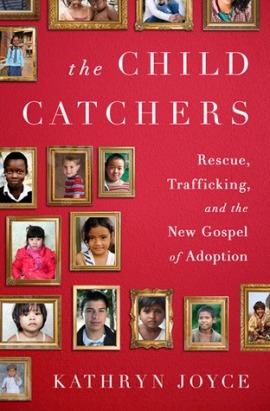 Entangled in the political juggernaut of reproductive rights, adoption is championed as a “win-win” compromise to a woman’s right to choice — abortion opponents “win” as the woman has not had an abortion, pregnant women “win” because they do not have to raise the fetus in question, and couples struggling with infertility “win” because they can finally become parents. Yet adoption is also entangled with serious moral and ethical dilemmas — as suggested by the subtitle of Joyce’s novel, “Rescue, Trafficking, and the New Gospel of Adoption” — that are only exacerbated as the demand for adoptable orphans far outpaces supply.

According to Joyce, the demand is rising because evangelical Christians are being encouraged to adopt en masse as a way to both raise up those Christian armies Joyce mentions in her previous book on the quiverfull movement and to answer the charge that anti-choice proponents care only for the fetus rather than the children already in this world. These evangelical Christians often control much of the adoption industry from the “crisis pregnancy centers” that lie to women about their rights to the political lobbying groups advocating for the mass evacuation of children from Haiti following the Port-a-Prince earthquake to adoption agencies operating overseas in countries where hefty adoption fees paid by Western couples provide an economic incentive to increase the “supply” of adoptable children.

“The Western understanding of adoption, as a total transfer of parental rights, is not a universal concept, and in many developing nations the closest analogues are traditional systems of temporary care, in which children stay with family members after a parent dies or are sent to richer acquaintances as a means of furthering their education and prospects. When international adopters come to regions that have only ever experienced these traditional forms of adoption, relinquishing parents often mistake the new adoption process for a chance for their children to get educated abroad and return better able to help the family or as a way for the family to make a connection with potential financials sponsors in the United States.” (pg. 133)

Thus, anyone seeking to adoption — of whatever faith and however well-meaning — is affected by the evangelical adoption movement because the movement shapes the way adoption is perceived, the language used to discuss it, the places where children are adopted from, and the laws governing the process. Rather than focusing on sustainable development or working to keep families in developing countries intact, Europeans, Americans, and Canadians channel their efforts into opening up countries to international adoptions and view themselves as heroic parents saving children from a life in poverty.

Despite its rather suggestive subtitle, I found the novel to be balanced and thought-provoking examination of the adoption industry, mainly those occurring between countries rather than intra-country.  Joyce masterfully argues that “Western parents are not so uniquely qualified for parenthood that any untrained couple can take on three or six or ten new adoptees and make the children’s lives better than they had been before” (pg. 28) through a series of case studies amidst a big picture examination of the entire adoption industry. She explains how some parents are not equipped to raise children from another culture who may be traumatized from war, being institutionalized, abuse, or other causes that brought them into adoption and thus “rehome” their adopted children either by finding them another family or returning them to their birth country.

This problem is not tracked by any organization in the United States, but it is the stated reason  as to why Russia closed their international adoption program. Other countries like the Ukraine and Rwanda shut down their adoption programs following a string of abuses, mainly children being presented as orphans when they have parents or families willing to care for them. The Ukraine launched a program to encourage domestic adoption and saw the number of international adoptions plummet as a result. The only children remaining within the orphanages were those with birth defects or other special needs that are at the bottom of the adoption “wish list” creating an issue where demand far exceeds supply, although I hate to apply such terms to children.

The only way to increase the supply is to take advantage of uneducated parents, to move onto a newly opened country before regulations can be established, and to advocate for the United States and other governments to remain pro-adoption despite documented abuses and problems.  The complexity of these issues are well-research and presented in such a way that I never became lost or bogged down in the intricacies of an international issue. Joyce’s book is, frankly, a terrifyingly sobering read and one I would encourage anyone considering adoption — or, to be honest, anyone who cares about children, period — to read.