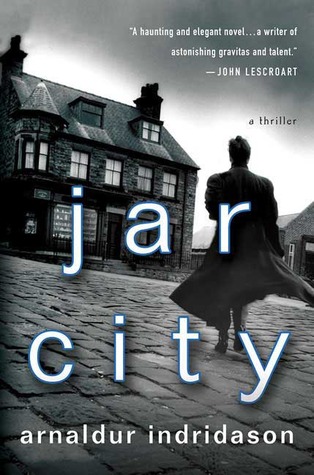 Inspector Erlendur is called to Reykjavík to follow-up on the only clues in the murder investigation of an single, elderly man named Holberg — a cryptic note left by the killer saying “I am HIM” and a photograph of a young girl’s grave from the 1960s. In the course of his investigation, Erlendur learns the man was accused — yet not convicted — of the rape of the young girl’s mother, Kolbrún, leading to him to reopen both the case and Audur’s coffin.

Icelandic murderers generally don’t leave anything behind but a mess.

Amid this investigation, Erlendur is struggling to help his drug-addicted daughter, who recently announced she is pregnant, stop her drug abuse and thwart the men hounding her — and now Erlendur — for money. His ex-wife, whom Erlendur has not talked to in years, has instructed their daughter, Eva Lind, to demand Erlendur also investigate the sudden disappearance of a bride at her own wedding.

Jar City refers to a room where human organs — some donated to science and some stolen from the morgue — are stored in glass jars. At first glance, the title seems like an odd choice for the novel but, without giving away major spoilers, the novel explores how Iceland, as a small island nation with little immigration, has a very small gene pool allowing genetic diseases to be easily traced through the population. Thus, Iceland is a living “jar city”.

A rather chilling observation that I appreciated for everything it is not — shootouts, knife fights, car chases. And Indriðason’s novel exhibits exactly what I look for in a crime novel — a narrative that unfolds without pretense and without gimmicks to keep the intrigue high. He writes the reaction of his characters learning about chilling crimes rather than describing them in action, which gives the book a certain punch to it.

Although this book is touted as the first in Indriðason’s series, it is actually the third in the series in Iceland but the first to be translated into English. I worried a bit about coming into the series as an odd jumping point, but Indriðason quickly gets the reader up to speed as to who Erlendur is and what his backstory may be.

Erlendur is as straight-forward as characters come, but his mind works quickly twisting clues to find the answer like the best detectives in crime novels. There was a bit too much going on in this novel for how short it is; the subplot of the missing bride could have easily been an entirely different novel. Yet, as in life, Erlendur’s troubles with Eva Lind do not pause so he can close a case.

Indriðason won the Glass Key Award in 2002 for ‘Jar City’. This award is given annually by Skandinaviska Kriminalsällskapet (the Crime Writers of Scandinavia) to a crime novel written by a Danish, Finnish, Icelandic, Norwegian or Swedish author.