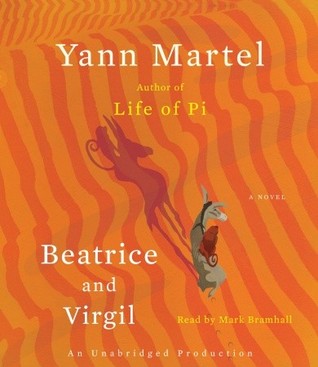 Martel’s novel is about the Holocaust. I state such a fact so starkly because I am still trying to wrap my head around his use of this topic. I admit, I picked this book up solely because of my deep and abiding affection for Life of Pi – both the novel and the film – and then avoided it for four years after hearing whispers of heavy criticism following its publication. I finally picked it up in part because of the shortness of the audiobook; I needed a sense of accomplishment before starting another twenty-four hour plus audiobook.

The novel seems to be semi-autobiographical; the main character, L’Hote, is coming off a wildly successful first novel and struggling to meet the expectations of his readers and his publisher with his eagerly anticipated second novel. Martel undoubtable experienced a similar situation following the success of Life of Pi; I know I was not the only one eagerly anticipating his next novel.

Henry tries to write about the Holocaust creating a “flip book” with an essay discussing the Holocaust’s representation in fiction on one side and a fictional account of the Holocaust filled with the very metaphors rarely found in Holocaust fiction on the other, but his publisher rejects the concept saying it is too complicated to read and to sell. Discouraged, Henry moves his wife to another town, takes a job in a chocolate café, learns the clarinet, and begins acting in a local theatre troupe. Fan mail praising his first novel and clamoring for a second still arrives at his door, but Henry is singularly intrigued by one letter in which an elderly taxidermist asks for assistance in editing a play he has written entitled “Beatrice and Virgil”. The play follows the lives of a donkey and a howler monkey named Beatrice and Virgil, respectively, during “The Horrors”, and Henry seeks out the taxidermist to learn exactly what he is trying to say in his use of allegorical use of animals.

“There’s nothing like the unimaginable to make people believe.”

Henry’s interest in the taxidermist’s tale is due largely to his advocating for a fictional approach to the Holocaust. He bemoans how few novels there are about the Holocaust, particularly ones written by non-Jews, and how those in existence are too grounded in history. (I’ve briefly written on this topic and the opinion of one of my former professors, a renowned Holocaust historian, about the mixing of fiction with the Holocaust.) He wants there to be Holocaust science fiction and Holocaust fantasy novels – a mutually cringe-worthy and intriguing idea – and eventually learns in the course of the novel through his interaction with the taxidermist’s play how such stories might take a reader, or a writer, to unintended places.

Beatrice and Virgil, the donkey and the howler monkey, are supposed to stand in for the experience of Jews during the Holocaust and while the use of animals in the portrayal of the Holocaust is not new, these particular animals are written in such a sinister and twisted way that we are to believe Beatrice and Virgil are animals in the way the Nazis unjustly and abhorrently equated European Jews, communists, and other victims of their regime. That is, Beatrice and Virgil sit beside a dead body with a rather blasé attitude and do nothing to assist women, who are humans in the tale, forced to drown themselves and their babies. (It is unclear if such suicidal actions were taken under the regime of the Nazis or the Soviet Red Army.) Thus, we reach the unintended places of utilizing animals in an allegorical manner and encouraging non-Jews – a certain subsect of non-Jews, that is – to write about the Holocaust, and the road to such places certainly raised more questions for me as a reader than I anticipated.

That said, I can certainly understand the criticisms surrounding this book and the reasons why so many people say there were revolted and offended by this book. It is one I recommend with the greatest caveat that I enjoyed it because of my personal interest in the construction and presentation of the Holocaust in fiction.