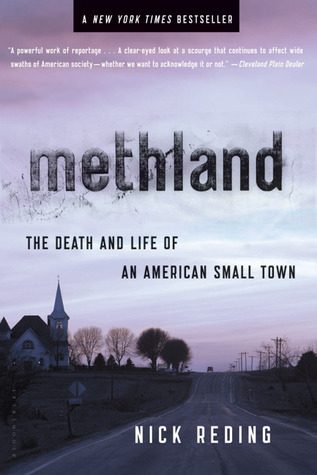 Subtitled “The Death and Life of an American Small Town”, Methland is based on Reding’s reporting in the agricultural town of Oelwein, Iowa from 2005 to 2007 and makes the connection between the decline of the family farm, the slashing of wages at meatpacking plants, and the rise in the use of meth. In the afterward of my edition, Reding explains how people are eager to reject the idea small towns can be plagued by drug abuse to same the extreme (or, even more so) than urban areas and, therefore, are unwilling to make the connections Reding makes or channel resources to the problem.

Reding frequently inserts himself into the story – a staple of narrative non-fiction – but this is not his story. The addition of his past, his family’s immigration to the area, and his return to the St. Louis area as though he is a prodigal son is meant to convince the reader that he has credibility to tell this story. Yet this constant interjection has the counter affect as I began to wonder why I should care about him, particularly since his only interaction with meth was with his interviewees. I was born in the same area as Reding; does that contribute to my credibility as a reader of this tale?

Given my interest in the rise in industrial agriculture in the United States, I was quite surprised and then quite curious by the connection Reding makes between meth and the decline in the family farm. Desperate people without hope or job prospects turn towards the highly addictive drug because (a) it is, apparently, quite the upper, (b) it allows them to perform their low-wage, long-hour jobs without pain or complaint, and (c) it is relatively easy to make at home or on the back of a bicycle. He also makes the connection between the hiring of illegal immigrants at meatpacking plants or in agricultural fields and the distribution of meth across America from Mexico. This connection seems rather suggestive lumping people desperate to escape poverty with the violent drug war they are often trying to escape, and I needed him to interview someone other than the locals who blame Mexicans as a source.

The book is structured into parts based on the year in which Reding is reporting on the problem, and I wonder if it would have helped the cohesiveness of his argument if he structured it thematically rather than linearly. Threads were often dropped because the next interview on the topic was performed in 2007 and the narrative is still stuck in 2006. His arguments might have felt more complete if they were more tightly grouped together rather than strung out from year to year.

Did I learn a lot from this book? Oh, yes. Big Pharma developed a mirror-image version of pseudoephedrine, a major ingredient in both meth and cold medicine, making it impossible to use for meth production, but the product was in not in use at the time when Reding was writing this novel. I’ve become accustomed to handing over my ID when purchasing cold medicine at the pharmacy, but I had no idea that companies like CVS and Target refuse to deny a sale as they would underage alcohol purchases. Seems to me preventing “smurfing”, the process whereby people are hired to travel around a city purchasing as much cold medicine as possible, begins and ends at the checkout counter.