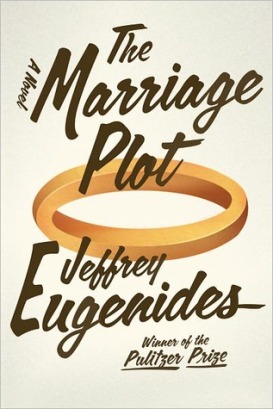 Mitchell Grammaticus loves Madeleine Hanna who loves Leonard Bankhead. This fact consumes the post-undergraduate lives of these three students from Brown University with Mitchell, a religious studies major, leaving on a backpacking trip across Europe and India with his closest friend while Madeleine clings to her plan to move to Cape Code with Leonard after being rejected from Yale’s graduate program, after her breakup with Leonard, and after Leonard is admitted to the hospital for manic depression leading the two to reunite once more. Mental illness consumes Leonard and Madeleine’s lives; questions of God’s existence and unrequited love for Madeleine consume Mitchell’s.

The title of this novel comes from the topic of Madeleine’s undergraduate English thesis – how the great British novels by authors such as Jane Austen focus on life leading up to marriage but never address the realities of life after “I do”. Eugenides novel, thus, tries to address this perceived failing of such novels by introducing the complications of mental illness, joblessness, fading friendships, and overbearing families and following life after marriage where the woman marries the wrong man.

I’ve come to anticipate a certain amount of pretentiousness with Eugenides’ writing and characters and in many ways this novel is overwritten and condescending. He expects the reader to identify with the pompous literary criticisms of his protagonist while simultaneously appreciating Mitchell’s search for God despite the constant reminders that such a search is “below” someone of his stature. And, for all their worries about money and jobs and next steps in life, the characters with the occasional exception of Mitchell never seem to feel any kind of pressure to find a job or do something to change their lives. Yet, there was something compelling and intriguing about the situation Eugenides created, particularly the contradictory understanding and misunderstanding of mental illness.

Leonard’s manic depression is cast as the villain in this book; it is the reason why Madeleine should not marry him, according to her family and Mitchell. For the most part, the reader must take Madeleline’s assertions that there is something redeeming about Leonard to keep her in the relationship and longing for it when it dissolves for Eugenides rarely tells the reader let alone shows them. And there were multiple points when reading this novel that I found myself urging Madeleine to leave Leonard for Mitchell before I’d stop myself and ask why?

What makes Mitchell more deserving of Madeleine’s love than Leonard? Does mental illness truly mean a person does not deserve to have someone to love them? And should Madeleine have to put her hopes and dreams and plans on hold because Leonard’s mental illness makes it impossible for them to move to New York or for him to hold down a job?

If these questions, which only Madeleine and Leonard can really answer, were the purpose of the novel – I cannot say for certainty that it was – then Eugendies is quite clever in his questioning of the marriage plot. But it takes an exorbitant amount of time to reach this point of understanding, and there are more than a few temptations to put the book down along the way.