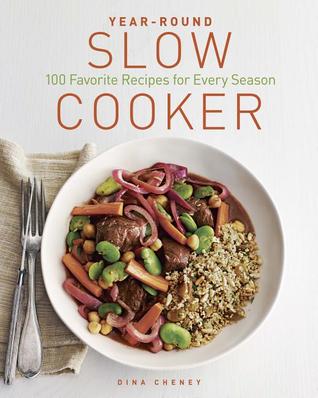 Can I say what a beautiful invention the slow cooker is? I’m so glad I followed my parents’ suggestion to buy one, and that the round-up of cookbook reviews from last month convinced me to see what cookbooks particularly made for slow cookers my public library had available. I select Cheney’s cookbook because it included a recipe for Hungarian goulash, but I ended up flagging six recipes and making five during the month of August. (I am clearly over summer; the only recipes I made from Cheney’s cookbook were from the winter and fall sections.)

I should have thumbed through the cookbook a bit more in-depth before checking it out, however, because visions of tossing a few items into the slow cooker on the way out the door before work were quickly dashed. All of the recipes require at least 45 minutes of prep and many cook on low for four to six hours, and I ended up doing most of my cooking on Saturday morning or Sunday afternoon because I couldn’t count on being able to duck out of work to turn off the slow cooker halfway through the day.

I started with her recipe for Hungarian beef goulash with yams and caramelized onions (pg. 160) as this was the recipe I was most excited to make. Unfortunately, Cheney’s version of Hungarian goulash is nothing like the dish I enjoyed during my trip to Hungary. The dish didn’t have that striking red color goulash in Hungary has, although that could be because I don’t have paprika sourced from Hungary.

Worse yet, its consistency is somewhere between a soup and a stew, and I ended up eating it like a dip with a side of crackers. It also did not hold up to freezing well and while I’ll always prioritize taste over appearance, this looked really unappetizing when I pulled it out of my bag during my lunch break. I was tempted on more than one occasion to toss it and head to the food court down the street. Quiet disappointing.

Chicken with white wine, wild mushrooms, and fresh herbs (pg. 68) ended up being one of the better recipes in this cookbook. The sweet flavor contrasted well with the blandness of the pasta or rice I served it over. It is also one of the few recipes that froze well — no watery yuckiness to drain off before reheating.

If I were to make it again, I would cut the chicken into smaller pieces. The recipe calls for thighs but I used boneless, skinless chicken breasts cut in half. Doing so helps with portion control — half a chicken breast equals one serving — but I think it would have been easier to eat and reheat had it been cut into smaller portions. I’d also add in more vegetables besides the onions and mushrooms the recipe calls for.  Peas or broccoli would be especially good with the sauce.

I’m not sure I messed up the recipe or if there was a flaw, but my curried chicken with ginger, mango, and lime (pg. 49) had unappetizing pasty texture to it that could not be masked by mixing in rice or pasta. I ended up picking out the chicken and tossing the sauce and the vegetables in the trash.

Although the ingredient list is different, the chicken with paprika, potatoes, and rosemary (pg. 176) tasted almost exactly the same as Hungarian goulash. With this recipe, I had to be careful to drain off any excess liquid before eating otherwise I’d have a layer of congealed fat to pick through. Once drained, the food tasted fine enough but this recipe is not a keeper. It was far too bland to make the forty-five minute prep time worthwhile.

I’ll admit that I seriously messed up the bolognese sauce with pancetta, porcini, and rosemary (pg. 187) as I did not add nearly enough tomatoes as the recipe called for. I had planned to use up the tomatoes I had leftover from making the goulash, but the tomatoes had spoiled and I did not feel like returning to the grocery store after I had just been there to buy other ingredients for this recipe. I also purchased a quarter of the pancetta called for the recipe because (a) I wasn’t sure I’d like it and (b) $3.99 for three ounces seems pretty steep to me.

But, hands down, this was my favorite recipe of the five I tried. I loved all the vegetables in the recipe — yes, Mom, even the cooked carrots! The recipe calls for skimming the fat off the top once it is done cooking for eight hours, which may be why I did not have the same issue I had with the goulash or the chicken with paprika. Because I screwed up the tomato content, I ended up not using the sauce as a sauce and instead ate it as a stew or with crackers. But I’m sure the right amount of tomatoes would make it a great pasta sauce, and I’d like to try it again as such.

Overall, most of the recipes I tried were not worth the prep time required of them and did not hold up well to freezing and reheating. Each recipe in Cheney’s book has a very long ingredient list to go with it, and I don’t keep most of the items — pancetta, mango, apricot nectar — on hand so this cookbook will be going back to the library just as soon as I finish copying the recipes for the chicken with white wine sauce and the bolognese sauce.

I read this book for the Cook It Up! Challenge hosted by Trish of Love, Laughter and a Touch of Insanity, which encourages participants to dust off their cookbooks and put them to us. Participants make their own rules as to how they have “completed” a cookbook — I try to cook at least four or five recipes in a month — and post about their progress on the first Saturday of each month, if they choose to do so.