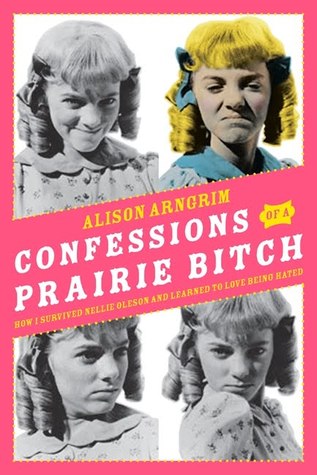 I can remember the first time I discovered “Little House on the Prairie” on the television during a day I was home sick from school. I’m not exactly sure how I failed to find out about this marvel of 1970s television until then considering how much I adored and reread Laura Ingalls Wilder’s series but I was held in rapt attention for the next two hours. The show was the best part of being sick and, during hot summers in Texas where I couldn’t stand to do anything but lay inside in the air conditioning, the best part of summer. I’ve seen all the episodes (I think) and even now I can very easily become sucked into the series if I find it playing on the television.

Arngrim’s memoir caught my eye during my free trial to Oyster mainly in response to the photographs of that evil Nellie Olsen on the cover – like most viewers of the television show and readers of the novels, I hated Nellie Olsen until she graduated from school and married Percival (on the show). But the title made me laugh and I’ve always planned to read the memoir of Melissa Gilbert, who played Laura Ingalls Wilder on the show, so I figured why not.

Turns out, Arngrim’s memoir is one of the funniest books I’ve read in a while. There are some very, very heavy topics; Arngrim suffers horrific sexual abuse at the hands of her brother and I cried when she discussed the loss of her dear Percival to AIDS. But, overall, the book is a humorous take on the odd experience of being a child actor on a period drama: Michael Landon’s refusal to wear underwear and heavy consumption of whiskey in the morning;  Katherine MacGregor (Mrs. Olsen) telling everyone how to act and being a larger than life personality; the fascination of all the child actors with the beautiful and kind Miss Beedle, who played their teacher; the writers’ fascination with putting Nellie into very murky water or having her and Laura duke it out.

Most of all, I was struck by Arngrim’s explanation that playing Nellie helped this quiet, abused girl learn to find her voice. People expected her to be a bitch affording her the opportunity to actually be one when the moment called for it. She didn’t have to worry about people hating her because most already did due to their inability to separate the character from the actor. A fellow student at Arngrim’s school called her a bitch after the first episode with Nellie aired, and Arngrim was actually knocked down by people at a fair who wanted to defend Laura.

In reality, she and Melissa Gilbert got along very well and are friends to this day. I spent much of the book laughing over their antics – peeing in their wetsuits during a particular long take, taking an advantage of the lack of audio during their fight scenes, sleepovers at each other’s house. Fiction does not always mirror reality. Although, I have to say, I always felt like there was something off about Melissa Sue Anderson, who played Mary Ingalls. I’m not a huge fan of Mary in the books, but I hated television Mary with the exception of a few episodes after she marries Adam. She’s so hoity-toity, and it was interesting to read that she was just the same in real life. (Now it’s her turn to write a memoir explaining why. I’d read it.)