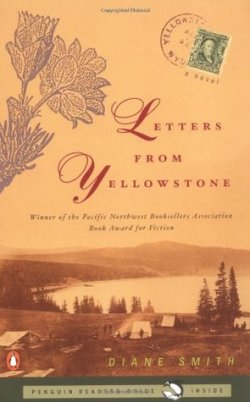 A case of mistaken identity — or, rather fanciful wishing on the part of Professor Howard Merriam and the use of initials on the part of Alexandria Bartram — allows a young woman who dreams of becoming accomplished in the field of botany to join a field study in Yellowstone National Park during the summer of 1989. Displeased that find a woman on their team, Professor Merriam and the rest of his hodgepodge team of scientists attempt to persuade her to return home, but Alex is determined to stay and explore the yet undocumented wonders of the Nation’s Park before the visitors — including a foreign count who calls hunting “science” — had a chance to destroy its beauty.

I once took a class at the university where many of Smith’s characters hail; there’s no Hill Hall but there is a building dedicated to the study of botany so Professor Merriam got his wish. And, having spent several summers and winters exploring Yellowstone Park, it was fun to revisit the park and consider how the first national park has changed and yet remained the same in the last 116 years. Captain Craighead may be a fictional character but I am thankful there were members of the U.S. Calvary, people in government and academia, and common citizens who refused to allow the park to be siphoned off into a series of private enterprises or for the railroad to build an electric rail through the park to carry visitors in and gold or ore out. Alex’s experiences are not entirely unlike my own — the excitement of seeing a bison for the first time, the wonderment over the Grand Canyon of the Yellowstone, the hope you will see a bear in the wild — and it was wonderful to revisit those experiences in my mind as I read about Alex.

The title of Smith’s book led me to mistakenly believe it was a nonfictional book and while it quickly became clear that was not the case, the book does live up to its title in the format in which it is written. Rather than relying upon a more traditional narrative, Smith presents the story in a series of letters and telegrams sent to family and friends outside the park’s boundary allowing the reader to be privy to thoughts and feelings that might not have been readily presented in another format. The letters did not always convey the time period in which they were supposed to be written. Some of the thoughts appears to modern, although that may be because I often have the same thoughts whilst visiting Yellowstone. Even so, I enjoyed this deviation in narrative styles enough to hope Smith finishes the other novel she mentions in the interview at the end.