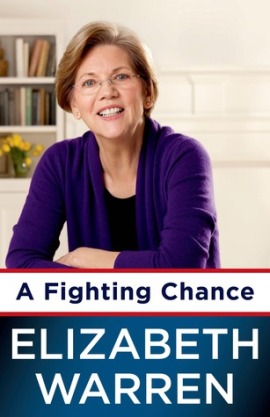 As the whispers of Warren’s name grows louder as a possible candidate for president in 2016, particularly in the area of America where I live, I could not resist grabbing Warren’s autobiography off the shelf at the public library. I had heard of Warren before became the first female Senator from the Commonwealth of Massachusetts; she was a frequent interviewee on the documentaries I watched about the 2008 economic crisis. But I knew little of her personal life or how she became involved in politics.

Warren’s early history is not unlike that of most women her age – expected to marry a man, raise children, and cut her own education and career short. It seems unimaginable that an eventual Harvard professor would drop out of college after marriage or would have to argue with her husband to be allowed to return, but I think that is what makes her more personable and better able to connect with people. She struggled for years to care for her children and finish school after her marriage ended and explains in the book that she was only able to finish for two reasons: (1) the tremendous and free support of her family who provided constant, reliable childcare and (2) the financial assistance of the U.S. government to attend university without the interest rates and high costs students today experience.

The second aspect is her latest fight in Washington, and the bulk of her memoir is devoted to detailing her first fight – the banking industry and their lobbyists. Declaring bankruptcy is the only way to clear one’s debts, although not student loan debt, and to stop the harassment of bill collectors, but the act is often presented as a scam, as a way people who are financial irresponsible are able to escape the consequences of their actions. It is certainly a view I have internalized and one Warren herself said she held because, after all, her parents were poor and never declared bankruptcy even after her father lost his job. Instead, her mother put on her ill-fitting suit and got a job as a telephone operator. It is the pull-yourself-up-by-your-bootstraps story that so permeates American culture.

“I will be grateful to my mother and daddy until the day I die. They worked hard — really hard — to help my brothers and me along. But we also succeeded, at least in part, because we were lucky enough to grow up in an America that invested in kids like us and helped build a future where we could flourish. Here’s the hard truth: America isn’t building that kind of future any longer. Today the game is rigged — rigged to work for those who have money and power.”

But visiting bankruptcy court as an adult for an unrelated matter, Warren saw people – young and old, blue collar and white collar – declaring bankruptcy after one medical disaster depleted their savings or they lost their job. Hearing these stories, Warren began researching the rise in the number of people declaring bankruptcy eventually leading her to research into the bank industry and to become an advocate for tougher regulation because the system is rigged.

And that, ultimately, is what her book is about – how the financial system is rigged in favor of corporations who want to do away with the ability of people to declare bankruptcy, how the political system is rigged in favor of corporations who donate millions to politicians. Warren refuses to mince words – a refreshing change from most politicians in this country – and while I doubt she will end up on the Democratic ticket given the vitriol backlash to her heading the Consumer Financial Protection Bureau, I am glad she is representing the Commonwealth of Massachusetts and the rest of the 99 percent in the Senate.