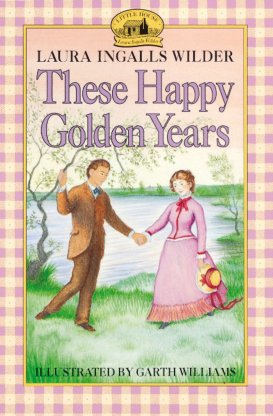 Fifteen-year-old Laura manages to earn her teaching certificate even though teachers must be sixteen in the Dakota territories and is sent to teach at a claim shanty twelve miles from the Ingalls family home. Feeling completely out of her element both as a teacher and a border in a local family’s home, Laura desperately wants to go home toughing it out only because her family needs her wages to pay for Mary’s tuition at the college for the blind. And, thankfully, Almanzo Wilder arrives every Friday with his sleigh to drive her home for the weekend no matter what the weather holds.

Judging by the torn spine, this was probably my favorite book in the series as a child. I’m not sure I would go as far to make that claim now, particularly because of how aghast I was at Laura’s attitude towards Almanzo. I wouldn’t dare to suggest a woman owes a man a date in thanks for driving her home, but she acts pretty resentful towards him for the intrusion into her life. Laura was told not to expect that her father would bring her home every weekend, but I do think she anticipated that he would and resented Almanzo for usurping Pa’s role as the hero.

That said, I do love how slowly Laura falls in love with Almanzo. It’s rather refreshing after the plethora of love-at-first-sight novels that saturate the market as of late. And I admired Laura’s determination to stick it out in her teaching job, although I would have thrown in the towel and walked the twelve miles home when the woman I’m living with pulls a knife and tells her husband to make me leave right now. Given the bleakness of such an event, I think the happy note on which the novel (and thus the original series) ends is probably why I loved the book so much as a child.