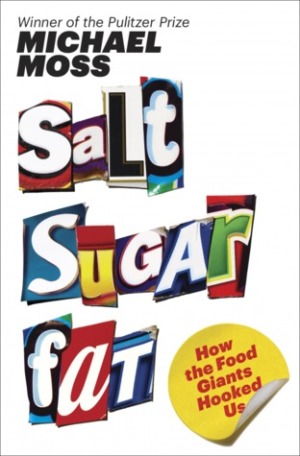 Every year, the average American eats thirty-three pounds of cheese (triple what we ate in 1970) and seventy pounds of sugar (about twenty-two teaspoons a day). We ingest 8,500 milligrams of salt a day, double the recommended amount, and almost none of that comes from the shakers on our table. It all comes from processed food, which is heavily dependent upon salt, sugar, and fat to create texture, taste, and a “heavy users” base of customers.

Moss utilizes examples from some of the most recognizable and profitable food companies and brands of the last half century — Kraft, Coca-Cola, Lunchables, Kellogg, Nestlé, Oreos, Cargill, Capri Sun — to explain how the average American ended up here. Food scientists funded by both the United States government use cutting-edge technology to calculate the “bliss point” of sugary beverages or enhance the “mouthfeel” of fat by manipulating its chemical structure so processed food not only taste good but also leaves the eater wanting more.

Marketing campaigns are designed using techniques adapted from tobacco companies to redirect concerns about the health risks of their products: decrease one ingredient, increase the other two, and tout the new line as “fat-free” or “low-salt”. Ultimately, Moss shows that today’s “food” companies could never produce healthy alternatives to their products because the industry itself would cease to exist without salt, sugar, and fat.

Moss’ book is divided into three sections and not in the order the book cover would suggest — first sugar, then fat, followed by salt. The first book is quite easily the best; I gleamed the most information from this chapter. I’ve been told for years that I need to stop drinking soda, but it wasn’t until I read the chapters on Coca-Cola featuring a former executive that it began to sink in just how much I need to kick this addition to the curb. Coca-Cola’s formula is specially designed to sit right at the “bliss point”, a term used by the food industry to describe food that leaves eaters craving more, and the goal of the company is not to increase the number of people drinking soda but the number of sodas people drink. In other words, I’m never going to be able to kick this habit to the curb unless I go cold turkey because one twelve-ounce can is never going to satisfy me. I’m always going to want more. I do wish Moss had used a measure other than teaspoons; it’s hard to reconcile the five teaspoons women are allowed max with the grams reported on food nutrition labels.

The problem with fat, apparently, is cheese. As Americans have rushed to eliminate trans-fat and saturated fat and drink skim milk, dairy produces in the country has been left with millions of pounds of milk fat that they can nothing with other than make into cheese. Production of cheese used to take months but industrialization by the food industry means the process now takes a matter of days, and the abundance of fat on the market means cheese is a relatively cheap product to inset into foods. Hence the advent of stuffed crust pizza, three cheese pizza, etc. Plus, when consumers push for sugar-free or reduced sugar options, the food industry increases the amount of fat and sugar in products to maintain the same taste. Moss cites another book on the topic of fat that I’m curious to read now.

The final section, Salt, was the least informative of the three. I knew that the majority of salt in the American diet does not come from the salt shaker on the table, and there wasn’t anything particularly eyeopening like Coca-Cola and the bliss point in this section for me, which is disappointing because salt appears to be the most commonly used ingredient and the hardest to escape. Moss explains how even Corn Flakes produced by Kellogg’s have salt and without it tastes like metal with the texture of cardboard. Gross. And unlike sugar, babies are not born liking it but must be conditioned into eating it so how did we begin to crave it? Moss never really explains, and I’m hoping I can comb through his citations and find a book that focuses more in depth on salt.