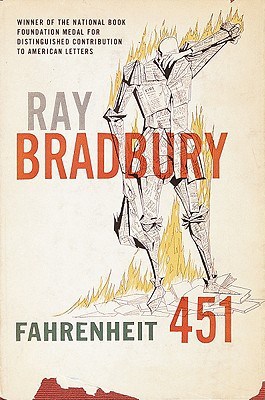 In the not too distant future, firemen no longer fight fires — they start them. Burning the books and the houses that hold them because books are illegal, obsolete thanks to television screens that cover all four walls of your living room. Guy Montag is one of these fireman and for ten years he has never questioned his job. But then he meets a seventeen-year-old girl who asks why instead of just how, who tells him that there used to be a reason besides kindling for these books.

“Last night I thought about all the kerosene I’ve used in the past ten years. And I thought about books. And for the first time I realized that a man was behind each one of the books. A man had to think them up. A man had to take a long time to put them down on paper. And I’d never even thought that thought before…It took some man a lifetime maybe to put some of his thoughts down, looking around at the world and life, and then I come along in two minutes and boom! it’s all over.” (pg. 51)

I first read Bradbury’s novel in middle school and liked it well enough. I then read it in high school and escalated that like to love. Reading it again nearly eight years later means I’m approaching it with a different set of eyes, and I found my reading experience to be vastly different this time around.

If you haven’t read the coda at the end, or you copy does not have the coda, I recommend trying to source a copy and reading it for yourself. Every teacher I have ever had, every person I have ever discussed this book focuses on the encroachment of technology into our lives, the emphasis on television and the Internet over reading books, and the censorship employed by regimes to keep people from learning about issues they find distasteful. But that’s not entirely the point of the story.

Rather, Bradbury writes in the coda that there is more than one way to burn a book. He talks about how “every minority, but it Baptist/Unitarian, Irish/Italian, Octogenarian/Zen Buddhist, Zionist/Seventh-day Adventist, Women’s Lib/Republican, Matthachine/Four Square Gospel feels it has the will, the right, the duty to douse the karosene, light the fuse” (pg. 177). As we strive towards a more inclusive society, a more politically-correct society — the kind of society deeply advocated for at my university — we risk erasing the flavor of our society, the errors of our past.

“Once, books appealed to a few people, here, there, everywhere. They could afford to be different. The world was roomy. But then the world got full of eyes and elbows and mouths.” (pg. 54)

Bradbury talks about how Fire-Captain Beatty describes in the novel “how the books were burned first by minorities, each ripping a page or a paragraph from this books, then that, until the day came when the books were empty and the minds shut and the libraries closed forever” (pg. 177). He’s not saying that we should not erase racism and hatred (at least, I hope he’s not!) rather he is saying that we cannot remove the pieces we find distasteful because then we will be able to close our minds rather than being forced to open them, forced to confront those parts of our past and present we do not want to exist.

This was never emphasized in any class or discussion I’ve had about this book, and I think its indicative of a large problem that exists in society. Or, at least in the society I am currently apart of. Because far too often people at my unversity choose to pretend that racism or sexism or classism does not exist, that we have moved on from the errors of our past because society is now post-insert chosen ism. If we don’t talk about it, it doesn’t exist. We can march towards closed minds and closed libraries because we no longer have to learn.

“If you don’t want a man unhappy politically, don’t give him two sides to a question to worry him; give him one. Better yet, give him none. Let him forget there is such a thing as war. If the government is inefficient, topheavy, and tax-mad, better it be all those than that people worry over it. Peace, Montag. Give the people contests they win by remembering the words to more popular songs or the names of state capitals or how much corn Iowa grew last year. Cram them full of noncombustible data, chock them so damned full of ‘facts’ they feel stuffed, but absolutely ‘brilliant’ with information. Then they’ll feel like they’re thinking, they’ll get a sense of motion without moving. And they’ll be happy, because facts of that sort don’t change. Don’t give them any slippery stuff like philosophy or sociology to tie things up with. That way lies melancholy.” (pg. 61)

The other reason why rereading this book was so interesting this time around has to do with the condition in which my copy is in. I used this copy when I read the book in high school, highlighting and circling the themes I found within the narrative. My brother then used this copy when he was in high school, highlighting and circling the metaphors, symbolism, and personifications he found within the narrative. What a vastly different way to approach  the story, and one I’m sure his teacher at the time required of him. But is this really the way we want people to learn and digest literature?

I mean, what is more important? Delving into a story and seeing how the narrative connects to larger issues, or breaking it down into writing techniques to be used and copied into your next paper? I’d much rather be able to read a book and see the connection to larger issues, to read a passage and mull over its critique for days than to be able to identify sentences where the author uses repetition or hyperbole. What a mundane way to read literature.