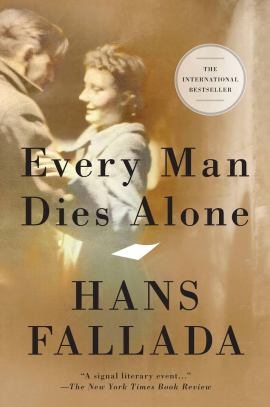 Fallada’s book has garnished particular attention since its publication because the book was written by a non-Jewish German victim of the Holocaust and was one of the fist books written by a German addressing the Holocaust. The book is based on a true story of a working class couple in Berlin who decided to take a stand against the Nazis. Their fictionalized selves are Otto and Anna Quangel, and their acts of civil disobedience are prompted by the death of their only son in action.

I have mentioned on more than one occasion that Fallada’s book was assigned for a course and was purchased before the professor changed her mind. It’s size is more than a little daunting and my previous attempts at reading the novel have been unsuccessful. I thought listening to the audiobook by George Guidall might help me overcome the introductory hump. Having finished Part One, entitled “The Quangels”, I can say firmly that has not quite been the case. Yes, I managed to move past the first three chapters, but I’ve also had to return to previous chapters and reread sections.

Of course, there are moments that have completely captured my attention. When Otto tells the foreman at his factory that he’s allowed to be unpatriotic today because he just received notification that his son had been killed in action? A minor act of rebellion that actually is quite major if you are all familiar with social and political pressure in Nazi Germany. The knowledge that everyone seems to posses about what is actually happening to the Jews is particularly noteworthy considering civilians denied knowing anything in mass after the war.

It’s just that something is off about my reading of this book. I normally don’t struggle to follow books about Nazi Germany so much. Yet, even when I listen at the gym or whilst completing mindless tasks such as data cleaning, I am just not engaged. I’m afraid that at the rate I’ve been reading this book I’ll finish it in December, at the earliest.