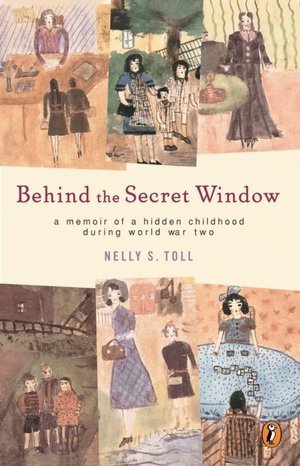 Subtitled “A Memoir Of A Hidden Childhood During WWII”, Toll’s memoir was one of my first introductions to the Holocaust. I purchased the book from the Scholastic school catalog and the rest, they say, is history. Toll’s life turns upside down at the age of six with the Nazi invasion of Poland. By the time she is eight, she has lost most of her family and has turned to hiding with Christian couples in the city.

When her first rescuers return her to her father, she is relocated to another Gentile home for hiding behind a secret window with her mother. For over a year, she lives in fear of discovery, writing in her diary and painting pictures of a fantasy world filled with open skies and happy families.

One of the things I love about Toll’s memoir is her ability to tell her story as an adult yet maintain the voice and view of a child. She allows gaps to exist in her memoir because a child of six would not know much of the information we know decades later. She focuses on how education and art not only helped her fulfill the long days and connect with her mother, but the addition of Nelly’s original watercolors show how a little girl’s imagination helped her survive a nightmare.

Another important aspect of this book — one I didn’t realize until after taking a class on the subject two years ago — was that people didn’t always help Jews hide and survive after the Holocaust. Toll’s first “rescuers” returned her out of fear of capture; the couple had been demanding payments from Toll’s father for her safe keeping. Even money could not keep this couple in their role as rescuer.

The second couple — the ones who kept Toll and her mother safe for a year — were emotionally abusive towards the little girl, and the husband asked to marry Toll’s mother even before divorcing his wife and news reach them of her father’s fate. Even after the Nazis lost the war, Toll’s life did not go back to normal. The friends charged with keeping the Toll family’s possession safe whilst in hiding suddenly could not find the items after the war.