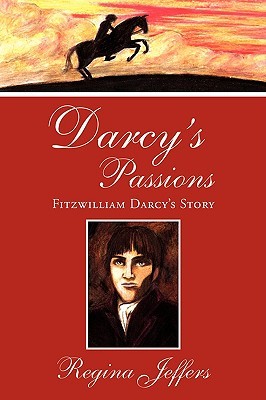 Despite the poor representation of Darcy on the cover of my copy, Jeffers attempt to tell Ftizwilliam Darcy’s Story produced one of the more plausible adaptions of this beloved character’s point of view.The title comes for Jeffers’ decision to focus on Darcy’s three passions — Elizabeth, Georgiana, and Pemberley — and the challenges trying to mesh all three pose on his person.

The novel begins at the start of Austen’s novel and continues on for a few months after the Darcys’ marriage. I have to applaud Jeffers for not succumbing to the notion that Darcy’s flaws dissipate over the night. Not only does the reader see him struggle before and after his first proposal but we are also privy to his struggles after Darcy’s marriage to his beloved Elizabeth.

Purists would be happy to find that Jeffers does not provide a lot of detail about the periods where Darcy is away from Elizabeth. Other than her epilogue, she sticks quite closely to the narrative provided by Austen. However, I missed this section; I would have liked to seen what Darcy was up to as he was nursing his wounds.

Even so, Jeffers’ retelling is quite good. Her representation of Darcy is one of the closest to that of my own interpretation.