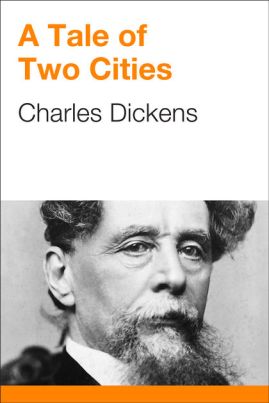 This book was selected as an informal read for Reading Buddies hosted by Erin of Erin Reads. Almost two months later, I finally finished A Tale of Two Cities! My plan to read-along to the audiobook read by John Lee while at the gym fizzled out.

Instead, I have a recent trip to New Hampshire complete with two wrong turns and a sun that sets before 7 pm to thank for forcing me to finish the novel. I also have to thank Spark Notes for helping me understand in those moments when I didn’t (and there were a lot of those!).

We have this novel to thank for one of the most famous introductions. It was the best of times; it was the worst to times. The two cities in question? Paris and London. The French Revolution is claiming victim after victim and the malevolence of Parisians as aristocrats are carried off to meet La Guillotine is most evident in Madame Defarge and her knitting. Dickens also wants you to know about the moral superiority of the English.

“It was the popular theme for jests; it was the best cure for headache, it infallibly prevented the hair from turning grey, it imparted a peculiar delicacy to the complexion, it was the National Razor which shaved close: who kissed La Guillotine, looked through the little window and sneezed into the sack. It was the sign of the regeneration of the human race. It superseded the Cross. Models of it were worn on breasts from which the Cross was discarded, and it bowed down to and believed in where the Cross was denied.” (pg. 365)

I think I was more excited about completing this novel than anything else. I never started to like it; I never started to hate it. I guess you could say I’m ambivalent towards it. But, then again, I do have an opinion.  Dickens is one of those authors I think I would like as I’ve heard that he and social justice go hand in hand. He was apparently quite the revolutionary in his day.

But I just didn’t see it with this book. Mostly condemnation of the French, the book became tiresome and confusing. I just never reached a point where I cared about the characters, even the ones I supposed to mourn for. Ultimately, I gave the book a one star on GoodReads although I did debate for a while between one and two stars. Have I been scared off from other novels by Dickens? Not quite. But it’s going to be a while before I pick up another novel by him, that’s for sure.