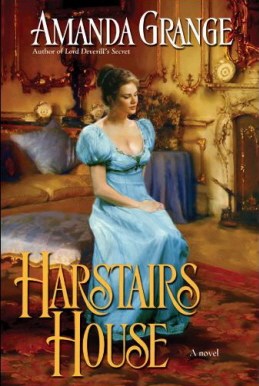 Susannah Thorpe has just been informed that she is set to inherit a house and a vast fortune from a former suitor of her great-aunt’s. However, a  small stipulation in the will of this stranger, requires her to either marry in a month’s time or spent the next thirty days in Harstairs House — a place reported to be haunted — before she can claim her inheritance.

With no one to marry, Susannah and another employee of her employer, Constance, settle into the new house determined to outlast any ghosts there might be. Once the ladies arrive, though, they find that Harstairs House already has a tenant — a man named Oliver Bristow with no intentions of leaving before his lease runs out at the end of the month.

Books set during the Regency period are a guilty pleasure of mine. I love the period but don’t always want to read tomes of classic literature over four hundred pages nor do I want to read romance novels set during the period. Grange’s novel walks a fine line between romance and staying true to the period, and I loved the element of political intrigue she weaves into the tale. This is an unpredictable element included in an otherwise predictable plot.

The ending of this tale was, unfortunately, left with a couple of loose ends. Without a satisfactory conclusion or an epilogue, I could only guess the true identity of an elderly man Susannah dances with at the ball who eludes to knowing her great-aunt or what was included in Henry Harstairs’ final letter to Susannah.