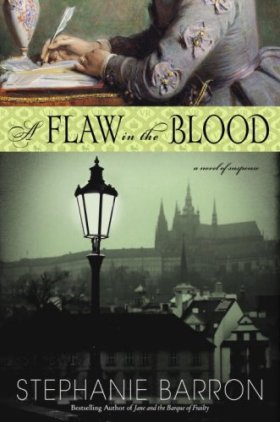 Shelved in the mystery section of my public library, Barron’s novel explores the genetic disease of hemophilia and its origin in European royalty, Queen Victoria. The Prince Consort, Albert, has just died from typhoid  and the entire country has been plunged into mourning. Queen Victoria is devastated, but she is also locked into a battle of wills with her daughter, Alice, and desperately afraid that Irish barrister Patrick Fitzgerald and Dr. Georgiana Armistead will expose her secret.

This is a surprisingly dark novel, painting both Victoria and the Victorian Era in a dark light. Dr. Armistead’s work reminded me greatly of The Winter Rose by Jennifer Donnelly but, unfortunately, not as well written. But Dr. Armistead and her circumstances steal the show in most of the book, and I would have loved for more of the novel to focus on her.

Also, the prejudice Patrick faces from everyone — including his own son — was an interesting section of the book that I wish would have been further expanded. Of course, expanding these two sections would mean the main focus of the book probably would have been pushed to the side even further.

Jumping from narrator to narrator, the novel shifts focus from the men trying to kill Fitzgerald and Armistead to the Queen to her daughter. This jumpy nature is often times distracting, and there were moments were I did not appreciate the interruption.

I’m trying not to spoil the ending but this piece of work seems almost sacrilegious as it cast doubt upon so much of the life of the Queen and her husband. Certainly an interesting explanation!