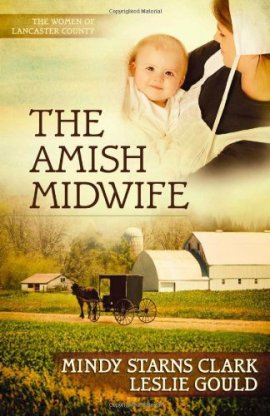 A dusty carved box containing two locks of hair and a century-old letter regarding property in Switzerland, and a burning desire to learn about her biological family lead nurse-midwife Lexie Jaeger from her home in Oregon to the heart of Pennsylvania Amish country. There she meets Marta Bayer, a mysterious lay-midwife who desperately needs help after an Amish client and her baby die.

I normally try not to spoil books in my reviews, but I simply cannot avoid doing so in sharing my thoughts about this particular novel. Go no further if you do not want the ending to being given away.

My first thought upon finishing this book was that Lexie’s biological family’s reasons for giving her away were such bullshit! Her biological mother, Giselle, was unable to care for her and her younger sister, Ada. Her mother’s sister, Klara, was willing to take Ada but not Lexie because she feared her husband, Alexander, had fathered the little girl. Never mind the fact that Giselle, Klara’s mother, and Alexander all assured Klara that he was not the father, that Giselle had been carrying on an affair with a married man.

And rather that standing up to Klara (or, God forbid, giving the girl to their vast network of family members to raise), this Amish family separated her from her sister and the rest of her family at the age of two-and-a-half and put her on a plane to Oregon. Yet the whole family welcomes Marta’s husband’s love child with open arms? Really?

I tried my hardest not to be too judgmental of this family’s reasons, but my enjoyment of the book was forever changed when Klara and the gang cleared up the mystery of Lexie’s adoption. Unfortunate because the novel was set up quite well until this point. I sympathized with Lexie’s frustration, and I wish the ending had turned out better for all involved.