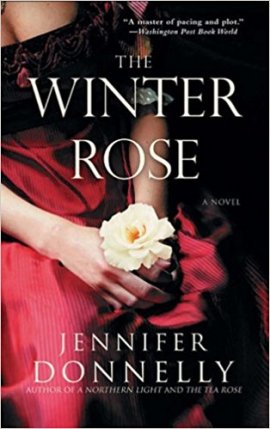 As much as I loved the first book in Donnelly’s series, it took me a couple of years to read the second book because I had heard the book followed different characters from those introduced in the first novel.

That’s not entirely true; Fiona and Joe do make multiple appearances in the second novel. But the focus is on India Selwyn Jones, an idealistic, newly graduated doctor living in London between 1900 and 1906.

India is desperate to change the lives of the poor people of East London. Armed with pamphlets on nutrition and child raising, India is convinced she knows what’s best for people living on round about a pound a week. She’s in for a rude awakening, however, when she comes into direct conflict with East London’s ruling crime lord — Sid Malone.

Malone’s activities and knowledge of the people of East London open India’s eyes to the real problems of poverty and help fuel her dreams of opening a free clinic for women and children of the area. India’s influential fiance — Freddie Lytton, an up-and-coming MP — will stop at nothing to marry India and gain her family’s fortune.

Riddled with cliches? Yes. But I just could not put the novel down despite it being over 700 pages. Sid’s brother and his mountain climbing love affair could have been left out. I willing to bet this was included because the third book in the series will cover Seamus and Willis, but I just wasn’t interested in a new story halfway through the book when the rest of the characters were already established.

The characters are all very endearing. I loved reading India’s transition from an idealistic young woman hell bent on reforming things she does not know to a doctor with a greater understanding of her patients.

Overall, this is a good book. Not as good as the first book and if the third book is going to be about Seamus and Willis, I’m not sure if I will read or not. But I am glad I picked up the second book in the series!