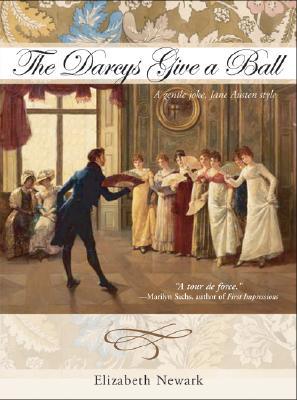 The title would have you think this sequel to Austen’s Pride and Prejudice is about the Darcy family, the focus of the book is really on the family of Mr. and Mrs. Collins. Twenty-five years after the final chapter in Austen’s classic, the Darcys and Bingleys and Collins now include several young adults and Elizabeth is finding “the romantic attachments of one’s children are a constant distraction”.

Eliza Collin, the youngest daughter of William and Charlotte Collins, is her mother’s pride and joy. Her introduction to the Darcy’s youngest son, Henry, reunites Elizabeth Darcy and her dear friend, Charlotte. But conniving forces in the form of Miss Bingley and Miss Juliet Darcy threaten to ruin any chances the two may have of forming a relationship. Juliet is entwined in her own relationship and considering an elopement without telling her parents of the relationship. Of course, Mr. Darcy must step in and save the day!

I was surprised at how thin this book is when I opened the mailing envelope on Monday. At 156 pages, I think it is the shortest sequel/variation I have read. Having finished the book, it is too short. The story could have benefited for some more details and a longer timeline. The conclusion of the book progress too quickly fr my taste.

But this novel is also the only one dealing with the children of the Darcys, Bingleys, and Collins I have enjoyed it. All of the children seemed like they could be the products of their parents’ union. They aren’t perfect nor are they caricatures of possibilities.

Guests of the ball also include the children of Emma Woodhouse, Anne Elliot, Fanny Price, and Marianne Dashwood so it serves as a sequel to the other novels as well. If you have not read Austen’s other novels, this may not be the sequel to start with.

Bottom line, I liked this book. It’s not my favorite sequel, and I believe I would have liked it more if there had been more text, more details, more information. Newark showed great potential with the tale, and I enjoyed my peek into Darcy and Elizabeth’s future.

Note: Newark’s book was originally published in 1997 as ‘Consequence’.